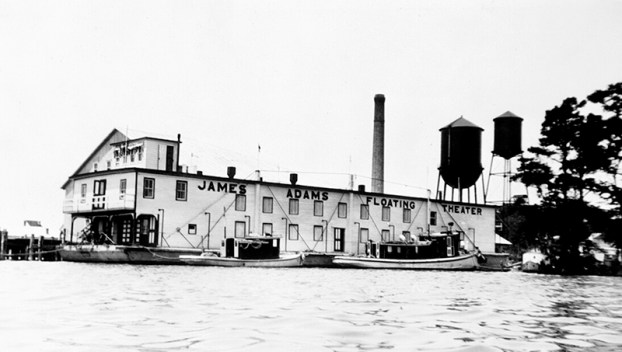 The original show boat of the Southeast, the James Adams Floating Theatre, was the first and only travelling boat to bring live theater annually to ports between Baltimore and Savannah, and it continued to do so between 1914 and 1941. Edna Ferber wrote her 1926 novel “Show Boat” after visiting the James Adams Theatre while it was docked in Bath, launching the “show boat phenomena” into American culture. She is believed to have travelled on the James Adams from Bath to Belhaven in April 1925, and to have first met it in Washington in late 1924, after the season had closed. Ferber’s novel, inspired in part by the James Adams, led to the 1927 “Show Boat” musical and its song “Old Man River,” and later the 1929 “Show Boat” motion picture and its 1936 and 1951 remakes.

Although Ferber’s story was about a boat named “Cotton Blossom” on the Mississippi River, and was based in part on Midwestern show boats, details in the novel undoubtedly reflect the James Adams Floating Theatre, which was built in Washington. James Adams was born in 1873 in Ohio. He and his wife, Gertie, married young in Michigan and, bored with their jobs in a sawmill and a store, trained as circus aerialists. Adams’ first business venture in his early twenties was running a traveling “medicine show” selling “patent” cure-alls and potions.

Adams first came to Washington in 1910 with his vaudeville show including a performance of the play “Four Nights in a Bar Room,” which the Daily News reviewed favorably. Adams boasted throughout his life that he had pioneered the 10-cent traveling vaudeville tent show in the Southeast. Vaudeville consisted of carnival-type feats, comic routines, variety acts and musical numbers. He operated several other traveling carnivals and circuses, making and losing his fortune, before remaking it again and briefly retiring, then finally returning to Washington at the age of 41 to launch his most original business venture.

The James Adams Floating Theatre was built in 1913 at Bill Chauncey’s Boat Yard (formerly Farrow’s) located at the bottom of Bonner Street in Washington. Adams financed it and personally designed and supervised its construction according to his unique entertainment vision. He selected local lumber and insured the boat through the Myers sisters, of the prominent local shipping company. On March 2, 1914, the James Adams Floating Theatre launched, accompanied by a band and a fascinated crowd; it was towed two blocks to Fowle’s dock in downtown Washington, where it premiered a unique show.

The boat was essentially a barge, 128.3 feet long by 34 feet wide, with a rectangular, Kleenex box-shaped building perched on top. The auditorium inside seated about 500 guests on folding opera chairs in rows downstairs, plus about 200 more upstairs in the balcony, reserved for persons “of color” and boxes. The boat had no power of its own, so two tug boats pulled it wherever it went; Adams had his own tugs built during World War I. The James Adams drew only 14 inches of water when empty, while the larger of the two tug boats drew about 5 feet.

The Daily News described the floating theatre as palatial and up-to-date. At the boat’s front end were the ticket office and lobby leading to the auditorium or balcony. The audience looked up to the stage located above the orchestra pit in front. Behind the orchestra pit and under the stage was the kitchen. One modern pull-chain toilet was located to the side of the stage. At the far end of the boat, eight staterooms for the approximately 25 performers were arranged in two tiers of four rooms; all rooms had hot and cold water but no bath tub, except for the manager’s room. The rest of the crew slept where they could find space, usually on the floors of the auditorium, stage and deck. The color scheme inside and out was white and trimmed with blue, silver, and gold paint. At each port stop, young boys brought in water and were rewarded with free passes.

The repertory company played primarily to audiences in small tidewater- and river-port towns, towns eager for live theater and entertainment, which was otherwise not available. The traveling performers maintained an intensive schedule: two to four days’ stay in each town with performances each night, plus one matinee, typically from April to December. The Floating Theatre’s schedule of stops changed from year to year. It regularly visited Plymouth, Edenton, Columbia, Williamston, Beaufort and Wilmington and wintered for repairs in Elizabeth City. Although in its later years, it no longer stopped in Beaufort County regularly, it is known to have stopped in Washington in 1925, 1933, 1935, 1939 and 1940.

Wyman’s Washington: On fees and taxes