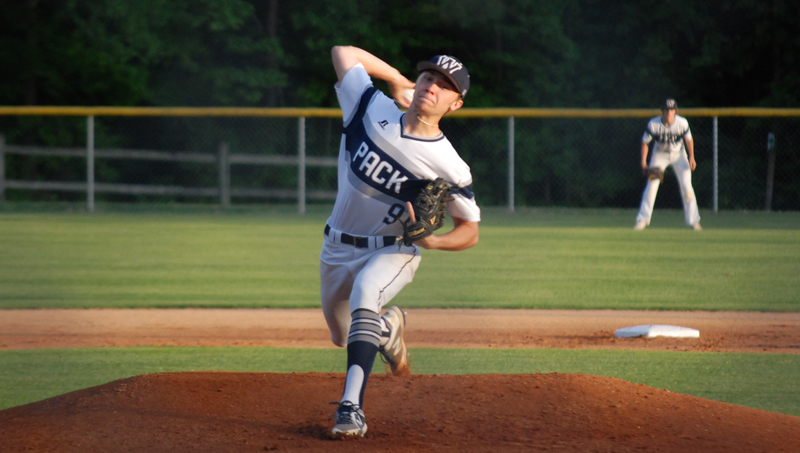 SENIOR NIGHT: Chris Sulc fires in a pitch during Thursday’s game. Sulc was one of seven Washington seniors honored before the game. (Sean Finnerty | Daily News)

The Pam Pack celebrated its graduating class Thursday as part of Senior Night and hoped to continue the festivities by clinching a playoff birth with a win, but a 5-3 loss to West Craven put a damper on the evening.

“We played hard, we got good pitching; they just had a couple more timely hits than we got,” Washington coach Kevin Leggett said.

Eagle Jared Hodges started off the inning by getting on base after the ball he hit took a funky bounce and got past Washington shortstop Frederick Holscher. Hodges eventually scored when a passed ball allowed him to take third, and the cutoff throw to the third baseman sailed high, giving Hodges the chance to go home and score the eventual game-winning run. The Eagles tacked on a fifth run in the fifth inning to increase the pressure on the Pam Pack.

Small mistakes have seemed to curse Washington this season.

“It’s tough, that’s kind of how it’s been a lot of our losses this year,” Leggett said. “It’s just little things like that haven’t been going our way lately. Little passed balls, hit by pitch, or errors, we just haven’t really had those fall in lately. 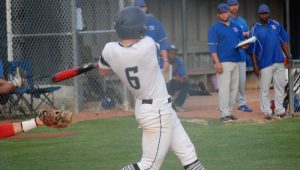 AT THE PLATE: Pam Pack senior Frederick Holscher takes a big swing during Thursday’s game against West Craven. The shortstop ended the night with two hits and an RBI. (Sean Finnerty | Daily News)

But Washington didn’t go down without a fight. Senior Drew Ferguson led off the bottom of the sixth with a double that hit the bottom of the wall in deep center. A sacrifice bunt moved him to third, but the Pam Pack couldn’t find the big hit to bring him home.

Fittingly on Senior Night, it was the seniors who carried the load offensively. Five seniors, Trippe Bonner, Holscher, Chris Sulc, Tyler Harrell and Ferguson, accounted for all seven of Washington’s hits. Ferguson and Holscher both had a team-high two hits, and the former had two RBI, while the latter knocked in one run.

As part of the Senior Night ceremony, the Watkins Athletic Award was given to Bonner and Cooper Anderson. The award is given yearly to two senior male Washington student-athletes in memory of Trent Watkins, a former football and baseball standout for the Pam Pack who was killed in a motorcycle accident in 2004. As part of the award, which Watkins’ parents Kim and Wayne presented, each recipient receives $750 and a commemorative plaque dated May 1 for Watkins’ birthday.

Washington will find out Monday if it will receive a bid to play in the NCHSAA playoffs.