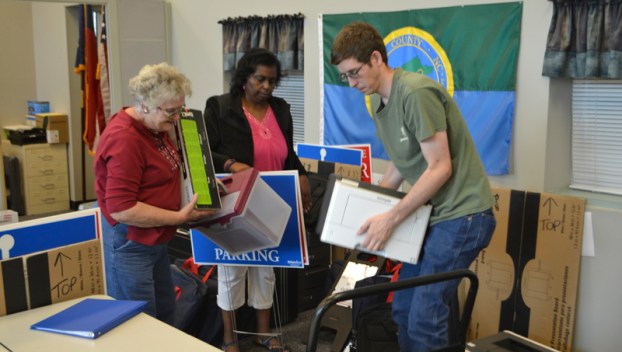 GETTING READY: Iris Lilley (left), chief judge at the Tranter’s Creek precinct polling place, get assistance from poll worker Diane Lee (center) and Chuck Guard, an elections specialist, in loading equipment on a cart at the Beaufort County Board of Elections on Monday. (Mike Voss/Daily News)

Behind-the-scenes work abounds in days before primaries and elections

Doors to polling places in Beaufort County opened early today, but before they opened there was plenty of behind-the-scenes work that occurred so they could open.

Those ballots, voting booths and vote tabulators did not show up at the county’s 21 precincts on their own. Elections officials and volunteers began delivering voting tabulators last week. Before the voting tabulators were delivered, they were programmed, checked and double-checked to make sure they are working properly.

There’s more to elections and primaries than registering voters and counting the votes. That’s why in the days, if not weeks, leading up to an election or primary that elections officials work late nights and weekends. Yes, it’s part of their duties. They say they do it because they want the voting process to be as easy and convenient as possible.

“We start preparing weeks ahead. There’s a lot of things we can’t do until certain other things are finished — like the laptops can’t be updated with voters until after one-stop ends,” said Anita Bullock Branch, the county’s deputy director of elections. “A lot of it we can’t do until just days before, which is why we put in such a long weekend before the primary.”

Branch said she and Kellie Harris Hopkins, elections director, spent long hours this past weekend taking care of duties than can only be accomplished between the end of the early voting period (which was 1 p.m. Saturday) and the opening of the polling places today.

Many poll officials were in and out of the Board of Elections office Monday, picking up items needed at the polling places.

“It will take about a hour to set up everything. We’ll be setting up our tables, locating where the tabulator will be, where are sample ballots will be. We’ll set up our tables for printers and monitors,” said Iris Lilley, chief judge at the Tranter’s Creek precinct, who picked up that precinct’s equipment Monday morning.

Jobless rates drop in all 100 counties

Beaufort County’s unemployment rate fell from 5.5 percent in February to 5.1 percent in March, according to information compiled by... read more