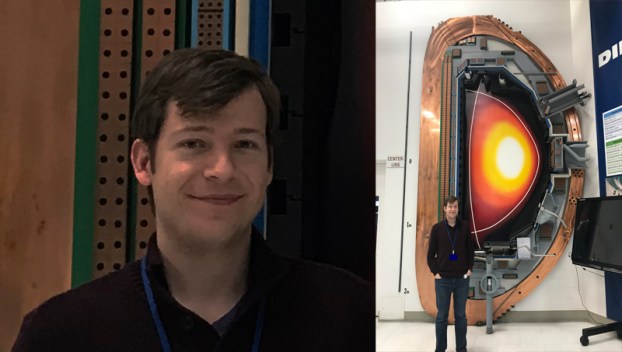 GOING NUCLEAR: Former Washington resident Jonathan Coburn is pictured here during his doctorate research at The DIII-D National Fusion Facility in San Diego. The DIII-D, represented by the cross section in the background, is the largest magnetic fusion experiment in the United States. (Jonathan Coburn)

Harnessing the immense power of the atom, nuclear fusion has the potential to power the world, and one former Washington High School student is working towards that future.

Former Washington resident Jonathan Coburn is one of five early career scientists in the world selected to participate in a postdoctoral fellowship of nuclear engineers working on the International Thermonuclear Experimental Reactor in Monaco, France.

While nuclear power plants are a common sight in the United States, the one Coburn and his colleagues will be working on is unique — rather than using nuclear fission to divide nuclear material, ITER seeks to make nuclear fusion a viable source of energy.

Where nuclear fission involves generating energy by splitting an atom, nuclear fusion generates energy by fusing atoms together. It’s the same energy principal that powers our sun and all the stars in the sky. In theory, nuclear fusion could mean a practically unlimited source of safe, clean energy for the world.

“The world needs to move to cleaner, carbon free or carbon neutral sources of energy. The way I see that panning out is nuclear power, alongside wind and solar, are going to play a big roll in that,” Coburn said. “Fusion is appealing because it can offer the base load power that the world needs without the long-term waste problems that currently plague nuclear fission.”

For fuel, nuclear fusion requires two ingredients — deuterium and tritium. While the former is readily available in water, the latter can be produced from lithium. The process produces practically zero waste, and a fusion reactor is incapable of meltdown.

ITER, Latin for “the way,” is a joint effort by the European Union, the United States, Russia, China, India, Japan and South Korea to bring practical nuclear fusion to the world. Selection for the fellowship is rigorous; Coburn is the first selected from NCSU and one of only a handful of Americans to join the group.

“My guess is that I will be working on plasma material interactions or disruptions,” Coburn said.

Coburn, the son of David Coburn and Janice La Barbera, grew up in Washington, attending P.S. Jones Middle School and Washington High School before completing his high school career at the North Carolina School of Science and Math in 2009. Attending N.C. State University, Coburn earned bachelors and master’s degrees in nuclear engineering. He is on track to complete his Ph.D this summer before he leaves for France for the next two years.

For the next generation of scientists coming up behind him, Coburn leaves an important piece of advice; “Stay actively engaged and excited about learning.”

Voters go to the polls Tuesday to mark ballots in the primaries to determine political parties’ candidates for the Nov.... read more