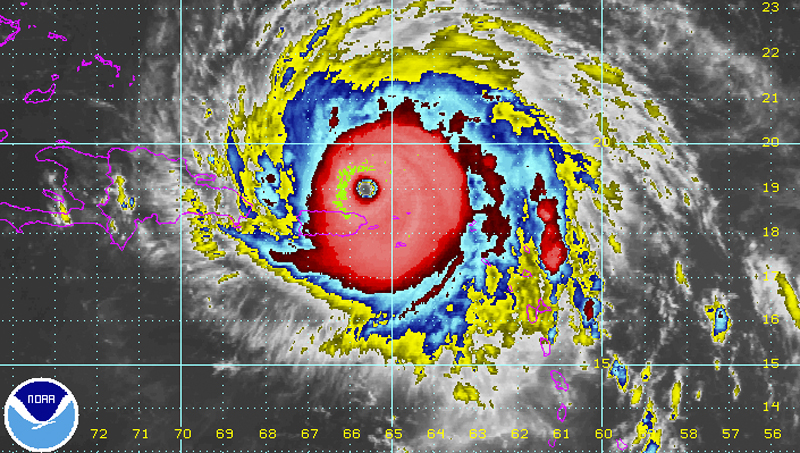 With hurricane season upon us, there are a number of simple steps families can take to ensure they are ready for the next storm. (NOAA)

If any of those hurricanes had made a direct hit on eastern North Carolina, perhaps this area would not be recovered yet either. It’s a sobering thought, and one Beaufort County Emergency Services is hoping will be on residents’ minds this week during National Hurricane Preparedness Week.

“We’re taking (the) week to make sure that we make every effort just to get word out on preparing across the board,” said Chris Newkirk, operations chief of fire and emergency management for Beaufort County.

Newkirk referred to the month and a half of last year, in which Harvey, Maria and Irma were at various times a looming threat, and said now is the time to prepare for the possibly of the same. The official hurricane season outlook has not yet been released from the National Weather Services, but Newkirk said university findings are trending toward the same number of named storms this year as last, but with slightly fewer major hurricanes. Still, now is the time to prepare what one can.

“A lot of preparation is made when you’re kind of under the gun,” Newkirk said. “It’s a whole lot easier to make those preparations when you have time on your rather than staring down the barrel of a hurricane.”

Newkirk said the first thing to look at is homeowner’s insurance. Often, property owners get a policy then don’t look at it again for years. Finding the paperwork and determining what a policy covers, any changes that have been made to the policy by the company, or any changes in a property’s value then making any needed revisions now could save a lot of headaches later, he said.

“That’s often one of the most overlooked pieces, and that’s something that can usually be done well in advance,” Newkirk said.

Another piece in preparing is talking to family about where to go if evacuation is necessary. Newkirk said now is the time to reach out to family and friends who live farther inland and have a discussion about possible places to stay if a major hurricane is bearing down on Beaufort County and, if one has pets, the places where those pets will be welcomed.

“If you have those conversations now, and you’re able to map that out as a family, you’re better prepared than to run that risk of not having an adequate plan,” Newkirk said.

Even if there’s no need to evacuate, residents need to assess whether they are prepared to be at home without power. Many were caught unprepared by three days without power after Hurricane Matthew in October 2016. Residents should start assembling their hurricane kits now, with requisite flashlights, canned goods, water and more, especially if they’re on a tight budget, Newkirk said.

“For some, it’s not easy to purchase all those things together. That could add up to a decent amount of money. If you do it in advance, you can put it together over time,” Newkirk said. “You can budget it in just like any other expense.”

Newkirk said emergency services isn’t just pushing the message out to be prepared during Hurricane Preparedness Week. Beaufort County Emergency Services is doing the work, too: partnering with churches to determine potential staging areas and other relief services, reaching out to businesses about creating policies defining when employees can leave to prepare for a hurricane and when they’ll be expected back to work after the fact; discussing emergency plans with local nursing homes so employees and their residents will be prepared to shelter safely in place.

“When you say hurricane preparedness week, we’re not just asking that as an office, we’re doing it ourselves,” Newkirk said.