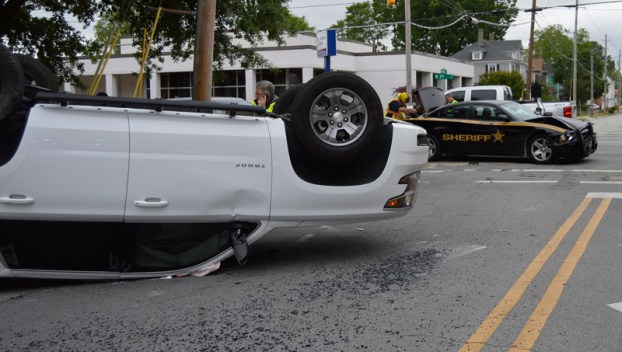 ROLLOVER: According to police, the vehicle flipped after being struck on the passenger side by the BCSO patrol car. The NC Highway Patrol found the driver of the Tahoe to be at fault.

A two-car rollover accident involving a Beaufort County Sheriff’s Office patrol car and a Chevrolet Tahoe at the intersection of Third and Market Streets prompted response from multiple agencies shortly before 1 p.m. on Tuesday.

The Tahoe, traveling south on Market Street, was struck by the patrol car traveling east on Third Street. Upon impact, the back passenger side tire of the Tahoe was knocked out of alignment, causing the vehicle to spin out and roll over. The Tahoe came to rest upside down on Market Street.

According to BCSO Lt. Kelly Cox, dashcam footage from the patrol car shows the driver of the Tahoe running a red light at the intersection. Cox said that BCSO policy dictates that deputies activate their cameras immediately following an accident.

“The camera system backs up one minute, so that’s how we know that he’s not at fault,” Cox said.

While multiple airbags deployed in the Tahoe, none were activated in the patrol car.

Agencies responding to the incident were Washington Fire-Rescue-EMS, the Washington Police Department, the North Carolina Highway Patrol and the Beaufort County Sheriff’s Office.

The driver of the vehicle was cited by NCHP Trooper L. Peele for failure to yield at a stoplight.