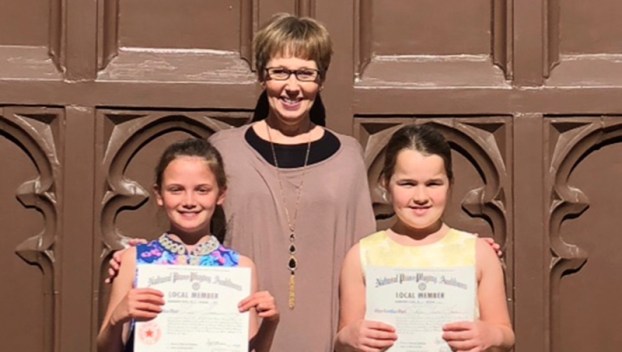 SUPERIOR PERFORMANCE: Liv Jones and Eliza Grace Jones performed May 1 in the National Piano-Playing Auditions sponsored by the National Guild of Piano Teachers, teacher division of the American College of Musicians. Auditions were held at First Baptist Church in New Bern. Liv received a “Superior” rating in her audition and Eliza Grace received a “Superior minus.” Both students performed two memorized pieces in the local program and passed with excellent report cards. Liv (left) and Eliza Grace (right) are students of Neva Cashion (center) with the Inner Banks Music Academy in Washington. They will perform again in the spring recital on June 2 at 2 p.m. at Arts of the Pamlico’s Turnage Theatre. This recital will feature many students of the Academy and is open to the public.  (Inner Banks Music Academy)