Pam Pack soccer breezes through to second round 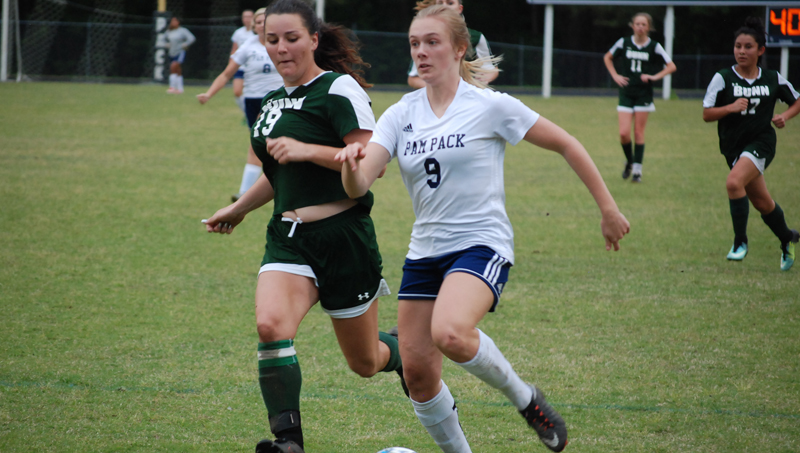 GOAL SCORING MACHINE: Washington’s Lilly Frances Lobos dribbles past a Bunn defender on the way to scoring one of her four goals in Tuesday’s 7-0 win over the Wildcats in the first round of the state playoffs. (Sean Finnerty | Daily News)

Washington’s Lilly Frances Lobos continued her blistering scoring rate from the regular season, notching four goals to lead the Pam Pack to a 7-0 victory over Bunn in the first round of the playoffs in in Washington Tuesday night.

The freshman, along with senior Sydney Walker, dominated the wings against the overmatched Wildcats. Lobos, who also set up two teammates for goals, was too much for Bunn’s defenders to handle, with her blend of speed and ball control. Lobos’ first two goals were the highlights of the night. In both instances, she received the ball 30 yards from goal and glided her way past several defenders before calmly slotting the ball past the goalie.

Despite winning by a seven-goal margin, Washington could’ve won by double that margin, at least. Both Lobos and Walker repeatedly beat their defenders out wide and played in crosses for teammates who had time and space to score. But many of the Pam Pack didn’t have their finishing boots on.

Washington coach Ed Rodriguez said finishing off scoring chances has been an issue all season, and his team must improve on that aspect as they go deeper in the playoffs and play tougher teams. But he’s still satisfied with how his team is playing overall.

“The defense did its job, we created a lot of opportunities,” Rodriguez said. “We’ve been doing good creating them, we just have to finish them.”

Washington took control of Tuesday’s game from the very start. Anna Frisbie earned a penalty in the third minute of the game, getting tripped in the box after combining with Lobos to break free of her defender. Frisbie then stepped up to take the penalty kick, coolly slotting the ball past Bunn’s goalie.

Lobos then proceeded to take the game over. A minute after taking the lead, the freshman winger broke free down the left flank and played a cross to Walker, but the right-winger was ruled offside. Then with 22 minutes left in the opening half, Lobos dazzled the crowd with her first mazy run for a goal, before repeating the feat with five minutes remaining in the first half to hand the Pam Pack a four-goal lead. Sandwiched between Lobos’ solo goals was a Rebecca Zerniak goal.

The second half was much of the same dominance from Washington, helped by a red card issued to Bunn’s Alex Husinko 10 minutes into the half. Lobos added two more goals and set up a Walker goal to cap the game’s scoring. But the Pam Pack generated a plethora of scoring chances through the speed of Lobos and Walker down the wings, but their teammates were wasteful and unable to convert the chances into goals.

Washington might have more help in the scoring department moving forward. Rodriguez said Jordan Prescott might return for the team’s second round game. The addition of Prescott would be a boom for the Pam Pack, as the senior’s 21 goals are second best on the team, despite missing eight games this year.

For its second round playoff game Washington will face the winner of Wednesday night’s game between Jordan-Matthews and Richlands.