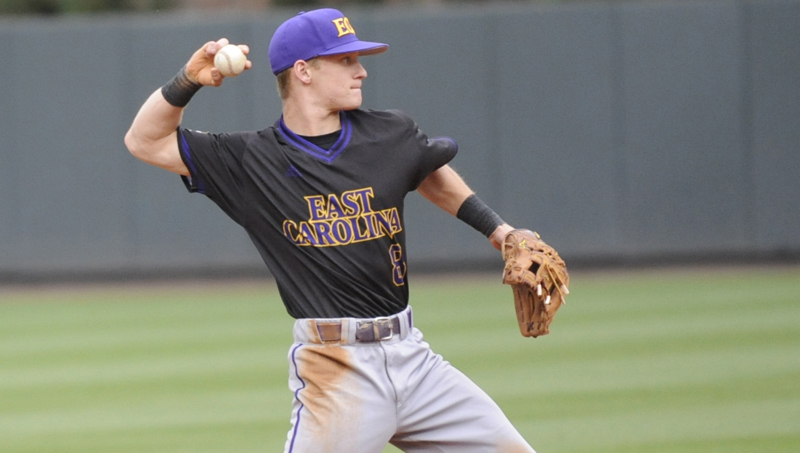 GREENVILLE — Led by sophomores Bryant Packard and Spencer Brickhouse, No. 10 East Carolina defeated Norfolk State 9-1 on Tuesday, followed by a 5-4 win over the University of North Carolina Wilmington on Wednesday, to complete a sweep of its midweek games. With the two victories, the Pirates pushed their non-conference win streak to 12 games and improved to their record to 35-12, 11-7 American Athletic Conference.

The Pirates used a five-run fifth inning on Wednesday to comeback from a 3-0 deficit and sweep the Seahawks this season. Brickhouse began the scoring for ECU after he sent Packard and Dwanya Williams-Sutton home with a triple down the right field line. Alec Burleson wasted no time at the plate and scored Brickhouse on the next at-bat to tie the game. ECU picked up two additional runs in the inning thanks to a UNCW error, when Burleson and Nick Barber came around to score on the same play, giving the Pirates a 5-3 lead.

“It was good to get things rolling like that because we were a little slow in the beginning,” Brickhouse said. “We faced a lot of adversity. A lot of guys went down and it was a punch in the stomach for our team. But it was good to come out here, get a hard-fought win like this against a big team like UNCW.”

Starting pitcher Jake Agnos struggled in a way he hadn’t experienced this year. He needed 68 pitches, 40 in the second, to record the first six outs of the game. During that time he surrendered three walks, two singles and allowed two earned runs. Agnos was pulled after the second. ECU head coach Cliff Godwin used the strength of the bullpen, an area the Pirates struggled mightily in last season, to finish out the game. Zach Barnes (2.0 innings), Ryan Ross (2.1 innings), Trey Benton (2.0 innings) and Davis Kirkpatrick (0.2innings) combined to finish out the game. Benton was pulled after recording the first out in the bottom of the ninth, due to a limp, and will be evaluated this week.

Ross gave up the fourth run to the Seahawks in the top of the seventh inning, making the score 5-4. But Kirkpatrick closed out the final two batters, but not without some drama. After falling behind on freshman third baseman LP Oxendine in a 3-0 count, he battled back to make the count full, prompting a visit to the mound from ECU pitching coach Dan Roszel.

After a long conversation between Kirkpatrick and Roszel, the pitching coach told Kirkpatrick to throw a slider instead of a fastball to a player who has just one hit this season. The plan paid off, as Kirkpatrick threw a pitch well outside the zone, but Oxendine bit and swung at it to end the game.

“It (was) a lot of discussion between Coach Roszel, myself, and Coach (Jeff) Palumbo actually,” Godwin said. “I have to give Coach Roszel a lot of credit. He said, ‘I’m going to go slider here.’ He threw him a slider and the rest is history. Great job Coach Roszel, and great job Davis, too, of executing the pitch.”

A day earlier, ECU had no problems handling Norfolk State at home in a 9-1 victory. With his fourth leadoff home run of the season, on just the second pitch he saw, Packard put the Pirates ahead, and they never looked back.

Williams-Sutton and Brady Lloyd added two more home runs in the bottom of the third inning, extending the Pirates’ lead to five runs. ECU took no time capitalizing on a different look it got from the Norfolk State pitchers. The fastest Spartans’ pitch topped off at 73 miles per hour, causing the Pirates to be patient at the plate and time their swings.

“The velocity their starter was throwing wasn’t something we are used to seeing, but I thought it was good for Packard, Dwanya and Brady to get us going early with home runs,” Godwin said.

ECU got the win behind Jake Kuchmaner, who picked up his second win of the season. The Pirates used four relief pitchers in this game, as Clark-LeClair Stadium saw Gavin Williams (1.1 innings), West Covington (1.2 innings), Willy Strong (1.1 innings) and Cole Beavin (0.2 innings) get more experience and close out the eight-run victory.

“I was just trying to fill up the zone as much as I can,” Kuchmaner said. “We knew they were going to run the bases, try to do some stuff. I just tried to mix my looks, mix timing and we’re just going to keep pitching like we usually do.”

ECU next play this Friday in game one of a weekend series against Cincinnati (25-22, 10-8 AAC), who sits one game behind the Pirates in the conference standings.