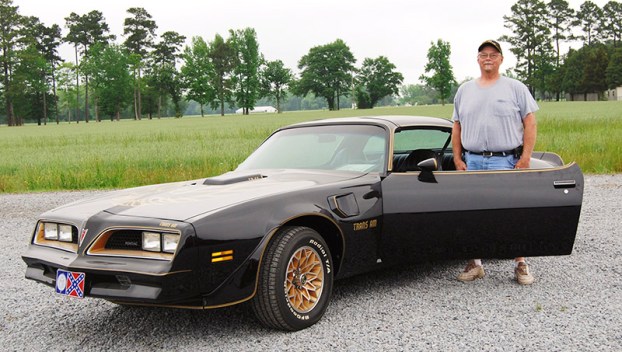 CHOCOWINITY — David Elks is a bit like a magician when it comes to turning trash into treasure.

The Chocowinity resident looks at old, neglected automobiles and sees past the dented fenders and rust spots. In his mind, they become shiny, classic gems that often leave other car buffs green with envy.

Over the past 15 years or so he has restored approximately 20 cars, most of which have stayed in the Elks family.

“Almost every one of them were right before going in the junkyard,” Elks said. “I don’t like buying cars that are already fixed up. I want the ones nobody else wants.”

Elks’ fascination with cars goes back to a time when he couldn’t even drive.

“My parents always bought their cars from Smith-Mills Pontiac in Washington,” he recalled. “We’d ride around the lot looking at cars. I saw a ’79 Trans Am there and fell in love.”

He eventually was able to purchase a car just like that one, which he said reminded him of the one actor Burt Reynolds drove in the movie “Smokey and the Bandit.” He still owns the car, which is one of his prized possessions.

“When I met my wife, I think she noticed the car first,” he said with a laugh.

Another car near and dear to his heart is a 1971 Trans Am, painted blue and white.

“They didn’t make but about 400 blue and white Trans Ams like it that year, and this one was about rusted out when I got it,” Elks said. “Every car I restore I try to do exactly how they came from the factory.”

Classic cars are an Elks family project. David Elks’ wife, their sons and daughter and their grandchildren all have their favorites among the family collection.

“My grandchildren already think they own them anyway,” he shared. “They’ve picked out the ones they want.”

The family often attends automobile shows together, and years ago Elks decided Chocowinity needed a car show of its very own. The Elks family has long been involved in the local volunteer fire department, so the Spring Heat show was launched as a fundraiser for that organization. This year’s show is set for May 19.

Elks has built a spacious 6,500 square foot building behind his home and there many of the cars are displayed. He recently added a glass and brick addition that mimics a car lot showroom.

Elks seldom takes his cars out for a leisurely Sunday drive, however.

“My thing is getting them, fixing them up and then just putting them up,” he said.

Cancer survivors were celebrated and others who lost their battle with the dreaded disease were remembered during this year’s Relay... read more