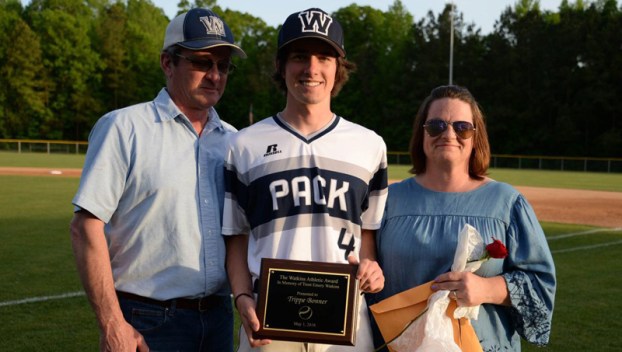 May 3 ended in sorrow for the Washington baseball team, but the night began with a celebration of the Pam Pack’s seniors. And part of the baseball team’s Senior Night tradition is the handing out of a scholarship award to a member of the baseball team, as well as the football team. Before hitting the field, Cooper Anderson (football) and Trippe Bonner (baseball) received the 2018 Watkins Athletic Award.

Being selected for the honor came as a shock to Bonner, who said he never would’ve thought he’d win the award. Anderson, who’s father used to coach at Washington, is well aware of the award’s tradition and is happy to be mentioned with the likes of Watkins.

It was a big honor to be given that award because of what Trent did and the person he was,” Anderson said. “I was really proud of that, just to be in the same conversation as him.”

Baseball coach Kevin Leggett, who also teaches Bonner in pre-calculus, said the outfielder stepped up this season when injuries hit the team.

“He was definitely the most improved player I had,” Leggett said. “All around, as a person and a player, he’s just a really good guy.”

Pam Pack football coach Jon Blank describes Anderson as a leader who tried to motivate his team and make sure everyone did the right thing.

“He was one of those kids who might’ve been a little bit undersized and made up for that in heart and effort. And I thought that’s similar of Watkins as well,” Blank said. “Cooper was an easy choice for me.”

Both Anderson and Bonner plan to attend ECU in the fall. Bonner intends to study engineering, while Anderson is leaning towards physical therapy and possibly playing for ECU’s club baseball team.

WASHINGTON — Abbi Tucker’s masterful display of throwing a no-hitter while striking out 18 Rams helped lead Washington to a... read more