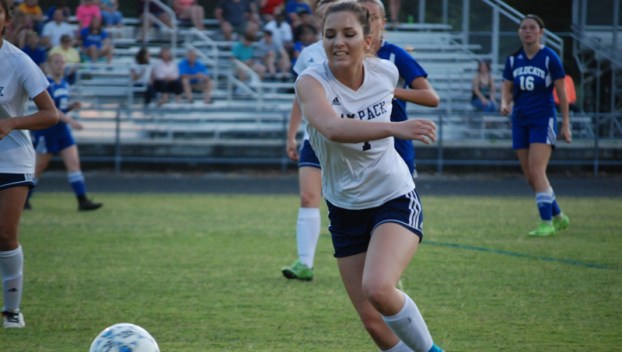 COMMITTED TO THE CAUSE: The Pam Pack’s Leah Rodriguez chases down the ball during Saturday’s 6-0 loss to Richlands. The senior battled bravely in midfield throughout the game but it wasn’t enough to overcome the Wildcats. (Sean Finnerty | Daily News)

WASHINGTON — Washington’s dreams of making a deep run in the NCHSAA 2A soccer playoffs came to an end Saturday night, as the Pam Pack was swept aside by Richlands, 6-0.

The Wildcats proved to be too much for Washington to handle, with forward Esperanza McKay and midfielder Ilaya Bigford leading the way for Richlands. McKay’s speed, dribbling ability and sharp finishing kept Washington’s defenders’ hands full all game. The senior spearheaded the Wildcats’ attack, scoring three goals in the game.

Bigford was a dynamo in midfield, covering acres of space. She seemingly won every loose ball and followed with a forward pass to a teammate, quickly transitioning her team into attack and keeping the Pam Pack defense on its heels.

Bigford’s effectiveness in midfield meant Washington’s key offensive players, wingers Lilly Frances Lobos and Sydney Walker, were isolated from the ball. Starved of service, Lobos and Walker dropped deeper into their own half of the field in an attempt to get possession of the ball. This meant when they finally got the ball, Washington’s dynamic duo were at least fifty yards from goal and swarmed by Wildcats.

Lobos and Walker fought hard but would end up getting dispossessed of the ball, due to the fact they were surrounded by two or three defenders with no teammates close enough to provide support. Thus, neither Lobos nor Walker were able to repeat their performances from their first round game, where they repeatedly dribbled past defenders on the way to scoring four goals and one goal, respectively.

Richlands took control of Saturday’s second-round playoff game from the very start. In the opening minute, McKay dribbled down the left flank and sent in a cross, just missing an open teammate in the box. That would serve as a warning to what was to come. Then in the next six minutes the Wildcats put three goals into the Pam Pack’s net.

The first came courtesy of McKay in the third minute of the game, getting on the end of Julie Mills’ cross and scoring with a glancing header to the far post. Just a minute later, Richlands’ Carly Schaub broke down the left and cut inside towards goal, before scoring from an extremely tight angle past Washington goalkeeper Julissa Perez, who was caught leaning left in anticipation of the cross.

McKay completed Richlands’ opening salvo with a goal in the seventh minute. The senior, thinking several steps ahead of the Pam Pack defense, ran onto a loose ball to go on a breakaway before coolly finishing past Perez for her second goal of the game.

As the game wore on, Washington’s defense did a better job of tracking runners and anticipating plays, keeping Richlands from scoring more in the first half. Pam Pack coach Ed Rodriguez said his team could have prevented those early goals if the team had played with more awareness from the game’s start, but he’s proud of how they fought all game against such a talented opponent in Richlands.

“My girls battled through all the way. We had holes in a couple of positions. We did what we could. There were a lot of minutes where we played very well defensively; we created some chances,” Rodriguez said. “But this is a good team, there’s no accident they’re number two in 2A. They’re very good, hold the ball well; a lot of experience.”

The Wildcats added three more goals in second half, with McKay getting one to complete her hat trick. Mills and Kate Jarman both scored to close out the game’s scoring.

MOUNT OLIVE — Fresh off of capping an undefeated season with a conference championship, the Washington boys’ track and field... read more