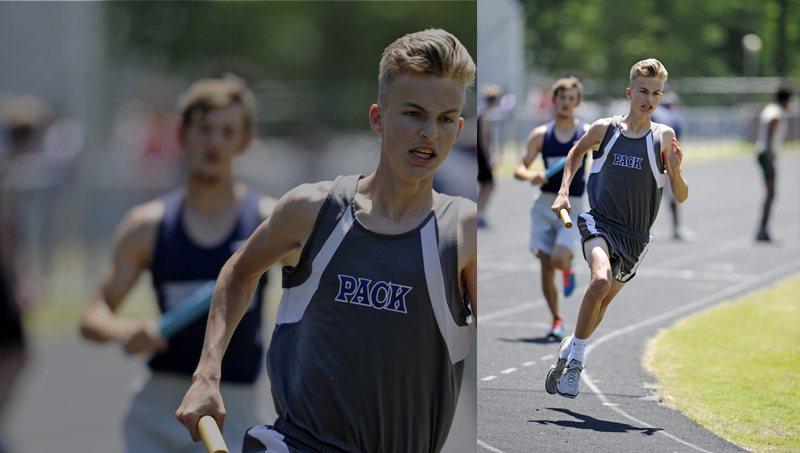 MOUNT OLIVE — Fresh off of capping an undefeated season with a conference championship, the Washington boys’ track and field team came in 21st place at the NCHSAA 2A East Regional meet on Saturday, while the girls’ team tied for tenth place.

A slow start to the day cost both the Pam Pack’s girls’ and boys’ teams from doing as well they hoped going into the regional meet. The girls’ team’s 32 points saw them tie Northeastern as the ten-place finisher, with Croatan (96.50) taking first. The boys’ team finished with 10 points, as Croatan (103) placed first.

It wasn’t all bad news for the Pam Pack, as Kimaja Spencer, a freshman, made a name for herself at regionals. The young sprinter took second in the 400-meter dash, finishing just half a second behind Croatan’s Trinity White, a senior. Spencer also ran anchor on Washington’s 4×200-meter relay team that placed first, as well as the 4×400-meter relay team that finished fourth. The top four finishers in every event earn a ticket to the state championship; so Spencer is headed to Greensboro to run the 400, as well as the girls’ 4×200 and 4×400 relay teams.

While the eastern region might have discovered Spencer’s talent this past Saturday, the Pam Pack has been aware of it all year. Washington coach Perry Owens said the highlight of their meets is when Spencer runs the 400, and all her teammates make sure to watch because they know she’ll put on a show. What excites Owens the most about Spencer, who, at regionals, broke her own school record in the 400 that she set at the conference championship, is the fact she has so much room for growth.

Joining Spencer at the NCHSAA 2A State Championship will be several relay teams. From the girls’ team, Zanasia Cratch (4×200 and 4×400), Ashanti Booth (4×200), Nykaya Ebron (4×200 and 4×400), Nadya Windley (4×400) are going to Greensboro. The boys’ 4×200-meter relay team finished fourth, so Treyvon Nellums, My’Kel Warren, Ka’ci Foreman and Jahno Bryant will represent Washington at the state championship meet as well.

The NCHSAA 2A Track and Field State Championship will be held at North Carolina A&T State University in Greensboro on Saturday.

Washington softball knocks out Eastern Randolph to advance in…