Washington softball knocks out Eastern Randolph to advance in playoffs 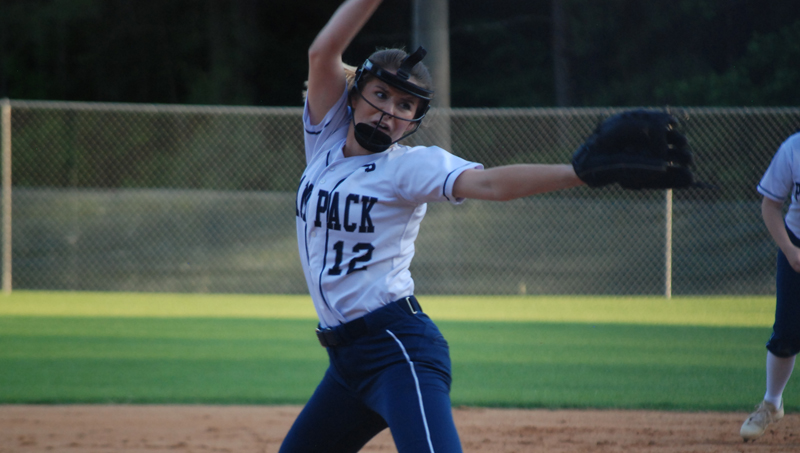 WORKHORSE: Washington’s Abbi Tucker winds up to throw a pitch in Friday’s 2-1 win over Eastern Randolph. The sophomore threw 105 pitches, including six strikeouts, to help lead the Pam Pack to the third round of the state playoffs. (Sean Finnerty | Daily News)

WASHINGTON — Playing the team that knocked it out of the playoffs last year, the Pam Pack emerged victorious in a closely fought second round playoff game against Eastern Randolph on Friday night, winning 2-1, thanks to some timely hitting and clutch pitching.

“We knew what we were getting; we played them in the third round last year. We lost to them 6-5 in the bottom of the seventh,” Washington coach Doug Whitehead said. “They’re a great team, great program and this was a great quality win for our program.”

The game was a pitching duel between Washington’s Abbi Tucker, who gave up one run on nine hits and racked up six strikeouts, and Wildcat starting pitcher Savannah Beaver. Neither team generated much offense, scattering their hits throughout the game’s seven innings. And when either squad managed to put multiple runners on base, both Tucker and Beaver, who allowed two runs and six hits, would step up and get themselves out of the dangerous situation.

“Two great pitchers, that’s all you can say. A couple of clutch hits here and there and that was the difference of the ball game,” Whitehead said.

One crucial part of the game was in the top of the sixth, with the Pam Pack leading 2-1. Tucker found herself in a jam, with runners on second and third and only one out. The sophomore pitcher looked like she might’ve been cracking under pressure, having thrown a wild pitch earlier in the inning.

But Tucker rose to the occasion, getting the next two batters to pop out attempting a bunt and fly out, respectively. On both occasions Tucker received help from her defense, with Mary B. Dixon rushing up to catch the pop fly and Grace Lassiter covering acres of space to snag the fly ball in foul territory.

Whitehead said the poise Tucker showed was something the team has grown accustomed to and was complimentary of the workload she can take.

Washington struck first and rather quickly at that. Summer Campbell led off the bottom of the first with a triple. Dixon followed up with an RBI-single to open the game’s scoring.

The duo of Campbell and Dixon were the Pam Pack’s offensive heroes on the night. They were Washington’s only players with multiple hits, with both going 2-for-4. Campbell added a double to go along with the first inning triple and scored both of Washington’s runs in the game.

Even though the Pam Pack’s bats were neutralized by Beaver’s pitching, Washington had opportunities to add more runs. But they couldn’t capitalize, stranding runners in scoring position multiple times in the game.

“I think we left nine or ten on. I haven’t looked at my stats yet, but we had a bunch left on,” Whitehead said. “There were some bunt opportunities we missed and that’s something we’ll work on next week to get ready for Tuesday’s game.”

Washington moves on to the third round of the playoffs with Friday’s victory. Its next game will be Tuesday, when the Pam Pack will host the winner of Saturday’s matchup between Whiteville and South Columbus.