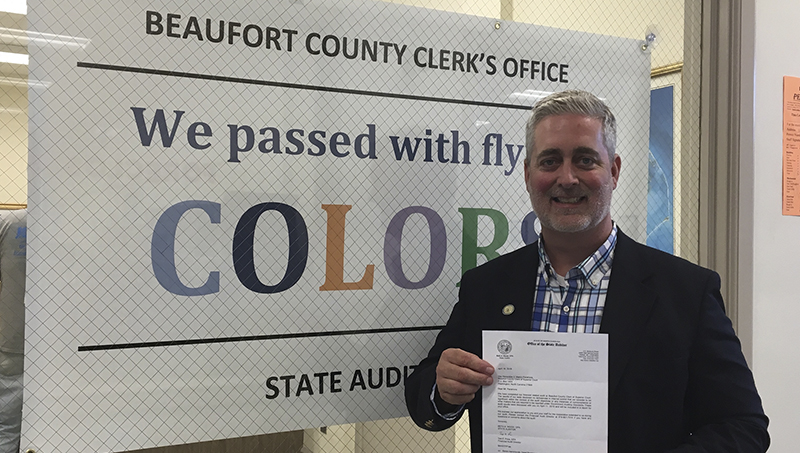 GOOD NEWS: Beaufort County Clerk of Court Marty Paramore displays letter from the North Carolina Office of the State Auditor showing that the Clerk’s Office received a clean bill for the past four years of its operation. (Marty Paramore)

For a third time, the Beaufort County Clerk of Court’s office has passed a state audit with flying colors.

“Three auditors spent nearly a month going through our files, and in the end no deficiencies were found. I believe it is important for the citizens of Beaufort County to know that we are doing things the right way,” said Clerk of Court Marty Paramore.

Doing things the right way means nearly $3.5 million was handled appropriately, as were more than 17,605 criminal and civil filings and 562 estates opened during the four-year period between audits. Paramore said another $140,145.35 in unclaimed funds was transferred to the N.C. Department of the State Treasurer.

Audits by the North Carolina Office of the State Auditor are routine, and their purpose is to not only expose any corruption currently taking place, but also any gaps in the office’s processes that could open the door to corruption, such as embezzlement. A 2006 audit revealed just such an opportunity, but the audits in 2010 and 2014 have shown that the past issues have been resolved.

“I would like to think I have worked to bring this office into compliance. Part of that is knowing what they’re looking for and knowing areas where we need to improve and trying to do that — because it never stops,” Paramore said.

While audits are expected every four years, Clerk’s Office employees do not know when they will happen.

“When they come in, they tell you the day before, ‘These are the files we want to see,’” Paramore said, adding that the process is not really disruptive, but does make employees a bit nervous, waiting for the results.

“They’re on edge because they want to have a good audit finding, because they know it’s a reflection of the work we do,” Paramore said.

Paramore credits his staff, which he refers to as dedicated and capable, for the continuing success.

“We’re just happy to have some good news to report,” he said.