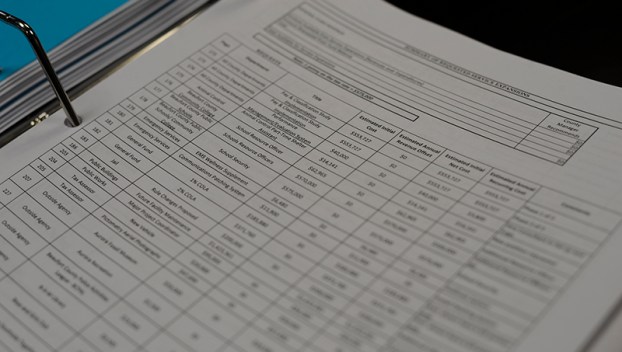 The proposed 2018/2019 budget for Beaufort County is in and it’s less than last year’s by $1.147 million. The budget also proposes a property tax rate of 60 cents per $100 valuation, an increase of 5 cents over the current rate — this, so the county will be able to collect the same amount of property tax next year as this year, since the most recent property revaluation lowered the overall value of property in the county.

“Essentially our revaluation values that they came up with in 2018 were about five and half cent down,” said county Manager Brian Alligood. “It’s not really a 5-cent tax increase. It’s a 2-cent tax increase because the 3 cent is revenue neutral.”

Property taxes accounts for 60.6 percent of the county’s total revenue. The additional 2-cents increase allows to the county to maintain current services it provides, Alligood said.

The proposed budget comes in under the current year’s primarily because of budget cuts. Five employee positions in the county have been eliminated: the county planner’s position, which has been outsourced to the Council of Government through the Mid-East Commission — a return to a previous arrangement with the agency; those of three Department of Social Service employees, who have retired and whose jobs assisting clients in their homes will be contracted out rather than rehire county employees; and a position in the tax office, which has been replaced by contracting with an automated collection/bill pay service.

“Without all the cuts we made, it would’ve been a 4-cent increase instead of a 2-cent increase,” Alligood said.

“The biggest part: education, always; social services, then public safety, in that order,” Alligood said. “That’s pretty much uniform across the state. Education is always No. 1.”

Alligood emphasized that the $56,714,321 number is the recommend general fund budget, and that the Beaufort County Board of Commissioners will decide whether they want to expand the budget to provide more services over a series of workshops starting tonight. Some of the items on the list for consideration are: providing armed School Resource Officers at every Beaufort County school, as well as an additional officer at the community college; school security infrastructure; and the adoption of a 20-year Capital Improvement Plan, based on a study done that determined that $28 million, or $1.5 million per year, is needed to maintain all county facilities.

“For us, it’s business as usual, trying to maintain the existing services that are being provided this year,” Alligood said.

The budget workshops will take place in the boardroom of the County Administrative Office, 121 W. Third St., Washington. Each is scheduled for 5 p.m. Commissioners will look at the continuation budget — the manager’s proposed budget that provides the same services as FY 2017/2018 — tonight; the general fund, water fund and solid waste fund on Monday night; service expansions on Tuesday night; then finalize the budget by next Thursday night.

A public hearing for the budget is scheduled for the commissioners’ June 4 regular meeting. The budget workshops are open to the public.

The 2018/2019 proposed budget can be found online at www.co.beaufort.nc.us and in the lobby of the County Administrative Office.

InterMarket Technology wants to buy about 3.39 acres at the Washington-Beaufort County Industrial Park so it can expand. To facilitate... read more