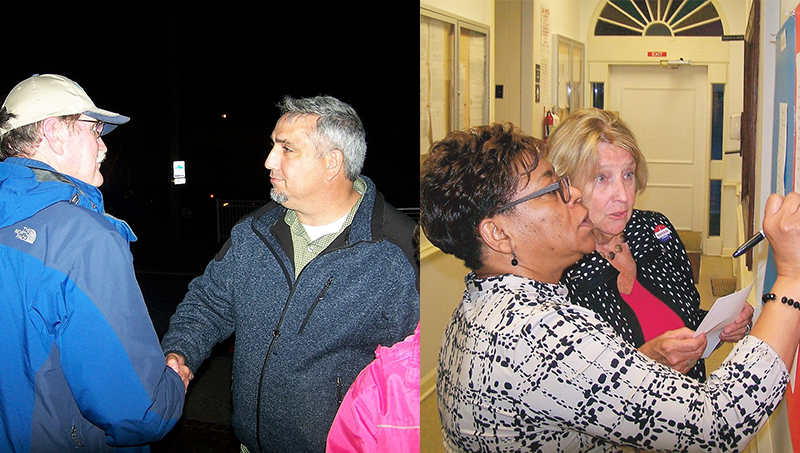 KEVIN SAWYER (left photo) is shown moments after learning he had won his bid for sheriff of Tyrrell County in the May 8 primary. The Democrat is unopposed in November. TYRRELL ELECTIONS BOARD MEMBERS (right photo) Inetta Knight and Debbie Huth (right) posted tabulated votes in the courthouse hallway Tuesday evening. All six precincts reported within 75 minutes after the polls closed. (R. McClees photo)

The Tyrrell County Board of Elections reports that 974 voters cast ballots in the party primaries and school board election that ended May 8, a 40.4% turnout of the county’s 2,410 registered voters.

Kevin Sawyer won the Democratic nomination for sheriff, and the three incumbent board of education members were re-elected, unofficial results show.

Sawyer received 360 votes, Joey Elliott 246, and Nathan McPeak 208 in a spirited campaign that brought 814 Democrats to the polls.

In a primary election among multiple candidates, state law says that if the highest vote getter has more than 40% of the total votes cast, he or she is the winner. So, Sawyer’s 44.2% extinguished Elliott’s chance to call for a second primary.

No Republican or unaffiliated candidates filed for the office, making Sawyer’s nomination tantamount to election to succeed Darryl Liverman as sheriff next December 1.

Sawyer led the early voting, which accounted for 39.8% of the ballots cast in the primary, and he was first also in each of the six precincts on election day.

Moments after the final tally was posted, Sawyer said, “I am looking forward to serving the citizens of Tyrrell County, and I thank everyone who participated by voting. I’ll serve everyone equally, whether you voted for me or not. It is an honor and privilege to serve as your sheriff.”

In the election for three seats on the Tyrrell County Board of Education, the three incumbents easily turned back a challenge by Kisha Norman.

Karen Clough led the ticket with 387 votes, Robin Dunbar garnered 272, and Carlos Armstrong got 189. Norman received 103 votes. There was one write-in.

In compliance with a 1994 federal court order, Tyrrell voters are limited to one vote in elections for school board and county commissioners on the premise that limited voting enhances the chances for a unified minority to elect candidates of its choice.

Bob Steinburg of Chowan County won over Clark Twiddy of Dare County for the Republican nomination to the N.C. Senate District 1 seat, 112 to 36, in Tyrrell. Steinburg also won the nomination district-wide. He will face Democrat Cole Phelps of Washington County in November.