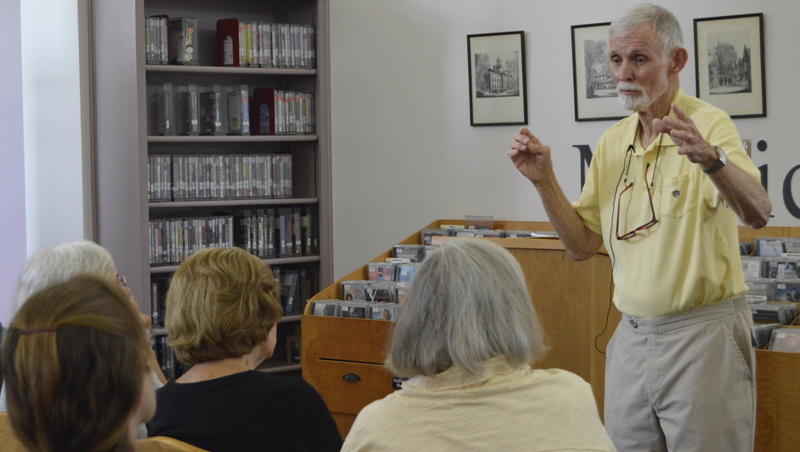 SPEAKING ON THE PAST: Longtime Washington resident and Washington Daily News columnist Bartow Houston was this month’s “A Bite of History” speaker at Brown Library. (Matt Debnam/Daily News)

With a history dating back many centuries, the story of Washington runs deep. The names, places and events that have made the city what it is today would fill many volumes, many times over.

For those interested in connecting with the city’s past, the George H. and Laura E. Brown Library’s “A Bite of History” speaker series offers a conversational avenue to explore the Washington of days gone by.

Bringing together storytellers, historians and long-time residents, speakers are scheduled every other month for the remainder of 2018. In each individual, series attendees will find a wealth of knowledge on local history.

Thus far, the series has been well attended, generating a new interest in the area’s past.

“We held it upstairs the first time and had 40 people, which was the max for that room,” said Claudia Dahlen, the library’s reference/genealogy specialist. “We decided to hold it downstairs and this time and last time we had more than 50 people.”

For some speakers, such as Bartow Houston and Blount Rumley, much of the 20th century history of Washington is still memory. While Rumley shared stories earlier this year about Washington in the 1940s and ’50s, Houston shared vignettes Thursday on notable people, places and events in Washington’s history in the 20th century and beyond. Terry Rollins kicked off the series in January with a discussion about North Carolina folk tales.

The series continues in July with a talk from Leesa Jones, executive director of the Washington Waterfront Underground Railroad Museum. In September, Sam Taylor will present a history of tobacco in eastern North Carolina. The series will conclude for 2018 with a talk from Ray Midgett, who will share information about Washington’s maritime history.

For the avid historian, Brown Library has so much more to offer. In addition to its speaker series, the library’s history room contains a wealth of records that might aid in historical or genealogical research. Items available include microfilm of Beaufort County records, county abstracts, local newspapers and indexed cemetery and obituary records.

For more information about the speaker series, or the library’s historical collections in general, contact Dahlen. Houston’s talk on Thursday, as well as all other talks to date, can be viewed on the library’s website, as well as on City Channel 9 on Suddenlink. The next talk is scheduled for July 19.