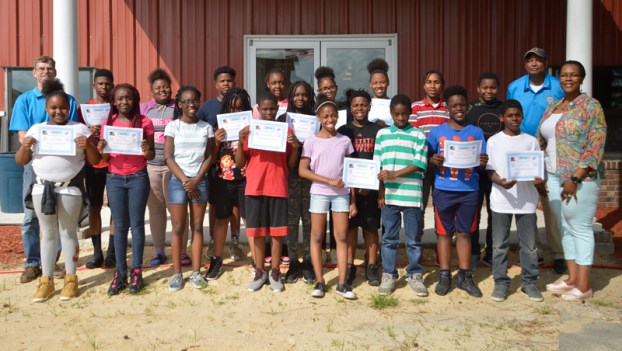 An interest in science and engineering doesn’t always come naturally to all students. Yet for the Boys & Girls Club students who participated in the 3D Vehicle Engineering class at the Beaufort County Police Activities League this past semester, the fun of hands-on learning may have prompted new interests.

For the past semester, students have spent two afternoons each week under the tutelage of Beaufort County Community College engineering instructor Matthew Lincoln, learning the basics of 3D modeling, 3D printing and mechanical engineering.

“It’s engineering and design for sixth, seventh and eighth graders,” BCPAL President Al Powell said. “They were talking about math, ratios and how to use a decision making matrix.”

The end result was a fleet of cars created by the students using parts that they modeled and printed themselves. The group held a graduation ceremony on Tuesday, marking the students’ completion of the program. As a special, additional treat, kids had the chance to ride in an airplane following the graduation.

“Kids who were scared to build and try the engineering aren’t scared anymore,” Boys & Girls Club unit director Darnell Maye said. “I think it was introduced to them on a level they could understand it, and then they grew into it. I also think it also helped to have African-Americans and people from all walks of life introduce it to them so they wouldn’t see the walls they normally see.”

While BCPAL conducted a similar program at Chocowinity Middle School last year, this marks one of the first programs to fully take place in the organization’s new building. Moving forward into summer, BCPAL will host its annual summer camp, connecting youth to aviation, boating and fitness.

It narrowly escaped demolition. The building tucked at the east end of the Main Street business district in downtown Washington... read more