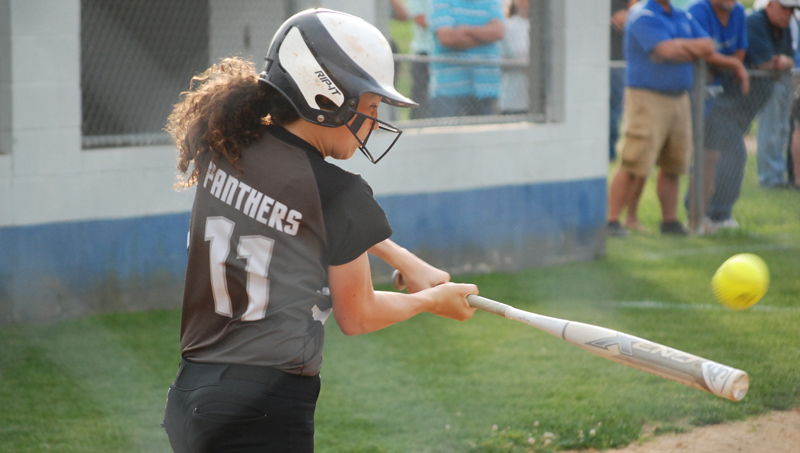 CLUTCH HITTER: Northside's Rylie Norman connects with a pitch to hit a double that drove home the Panthers' first run in their 6-3 loss to Camden County on Friday. (Sean Finnerty | Daily News)

CAMDEN — It was a rollercoaster of emotions for the Northside softball team Friday night, as the Panthers rallied to tie the game from two runs down in the top of the seventh, to only lose 6-3 and bow out of the playoffs after Camden County hit a walk-off, three-run home run in the bottom of the seventh.

“I’m proud of the girls. They battled the whole way. I thought for a little while they had a chance to fold up and they chose not to,” Northside head coach Gil Robbins said about his team. “We made a game of it. 3-3 in the seventh and then a walk-off; some things are meant to be.”

The Panthers entered the top of the seventh with things looking bleak. They trailed 3-1 and only had one hit against Camden County starting pitcher Hailey Bunting. The situation seemed worse when Bunting struck out the first two Northside batters of the inning, giving the sophomore 13 strikeouts in seven innings of work.

But then Rebekah Williams jump-started the rally for the Panthers, hitting a single. Brooklyn Hudnell followed with a double, moving Williams to third and drawing a roar of cheers from the Northside dugout and the section of away fans in the stands.

At this point, Robbins decided to insert freshman Kathleen Slade as a pinch hitter with two outs and the season on the line. The young second baseman/pitcher rose to the occasion, making solid contact and driving home Williams and Hudnell to tie the game at 3-3.

Having just tied the game in the final inning, the Panthers and their fans were full of energy. But it would soon be sucked away from them. The bottom of the seventh began with Camden County’s Morgan Nash being hit by a pitch. Bre Bratton followed by bunting safely and moving Nash to second. A sacrifice bunt then saw Nash and Bratton move to third and second, respectively.

Up next came Cailey Byrum, who already had a two-run base hit and a double to her credit in the game. The senior outdid herself and played the hero, launching a three-run home run over the right field fence to win the game and send the home crowd into a frenzy.

Northside got off to a slow start on Friday, mostly due to Bunting’s pitching. The Bruin pitcher struck out the first six Panther batters she faced. She didn’t surrender a hit until the sixth inning, when Rylie Norman hit an RBI-double to get Northside on the board. It was the second game in a row the freshman was brought in to pinch-hit in a crucial moment, and Norman came up aces, just like she did against No. 1 seed East Carteret.

The loss ends the season for the Panthers, who’ll lose seven seniors to graduation. The production of Williams, Hudnell, Savannah Slade, Rylie Newman, Whittney Cromwell, Emori Smith and Kaitlyn Spain will surely be missed. But the performances of young players like Norman, Kathleen Slade and sophomore pitcher Madison Braddy has Robbins feeling his team will be just fine next year.

“What you see in our freshmen and sophomores, our pitcher is a sophomore, you got a foundation there for a really strong team,” Robbins said. “We expect to come back next year, people are going to say we’re young, but we’re not going to be short of talent. Next year we’re hoping for nice things to come from them.”

Northside faces off against Camden County in 4th-round playoff…