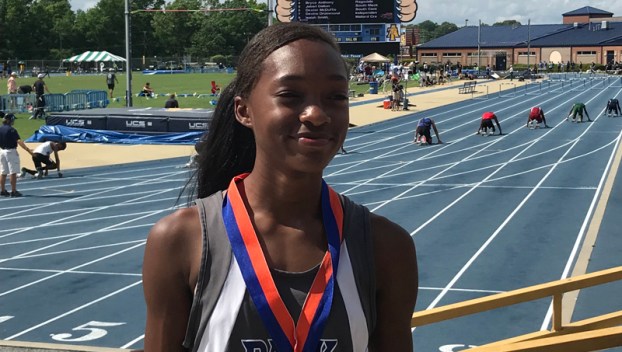 TALENTED FRESHMAN: Washington’s Kimaja Spencer shows off her second-place medal in the 400-meter sprint she won on Saturday at the NCHSAA 2A State Track and Field Championship. (Perry Owens)

GREENSBORO — A dream debut season running for the Washington girls’ track and field team fell just short of having the perfect ending, as freshman Kimaja Spencer took second place in the 400-meter sprint at the NCHSAA 2A State Championship at North Carolina A&T State University on Saturday.

Spencer finished with a time of 58.25, behind only state champion Samantha Payne’s time of 57.30. Spencer’s finishing time broke her own personal record, as well as Washington’s school record in the girls’ 400. It was the third week in a row Spencer set a new personal and school record in the event, after doing so at the conference championship and regional track meet, showing just how strong the freshman finished the year.

“What more can you ask for from a freshman,” Washington track and field coach Perry Owens said.

Owens said Spencer trained in the week leading up to the state championship by running 500 meters, so she would be stronger coming down the final stretch in the 400. It proved helpful, as Spencer got off to a slow start on Saturday but she was able to finish strong and almost overtake Payne, from Ledford High School, to finish first.

“Had the race been five or 10 meters longer, she definitely beats (Payne),” Owens said. “But hats off to Ledford, they do a tremendous job with their team.”

Spencer also ran as part of the 4×200-meter relay team and the 4×800-meter relay team on Saturday. The 4×200 team, with Spencer, Ashanti Booth, Zanasia Cratch and Nykaya Ebron, finished fifth, just one place off from winning a medal. Nadya Windley joined Spencer, Cratch and Ebron on the 4×400 team to finish 10th and set a personal record in the process.

Also participating at the state championship meet was Washington’s boys’ 4×200-meter relay team. Treyvon Nellums, My’Kel Warren, Ka’ci Foreman and Jahno Bryant teamed up to finish 10th in Greensboro on Saturday. Owens said he was proud of the improvement shown by the 4×200 relay team, who finished last season ranked last in the region.

“This year, to finish 10th in the state in 2A is just a phenomenal improvement with such a young group with just the one senior,” Owens said. “I couldn’t be more proud of them.”

The 2018 track season was definitely a successful one for the Pam Pack. Both the girls’ and boys’ teams improved from the previous year, as the boys’ team went undefeated on the way to winning the conference championship. The season just ended but Owens is already looking forward to the future and hoping to keep his track athletes involved in a sport to keep them fit and competitive.

“I’m really excited to try to get most of those track runners involved in a fall sport, whether it’s football, soccer or cross country, and hopefully keep this thing rolling,” Owens said.

WASHINGTON — An awkward bounce of the ball was all that separated Washington and Whiteville in Tuesday’s third-round playoff game,... read more