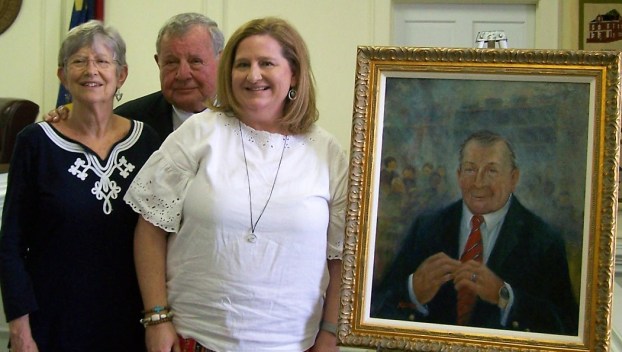 Midge and Charlie Ogletree and their daughter, Lydia O’Rear, stand beside Ogletree's portrait that was unveiled May 17 and will hang in the main courtroom of the Tyrrell County Courthouse in Columbia. (R. McClees photo)

Charles W. Ogletree was county attorney in Tyrrell County for 37 years, and his contributions were recognized May 17 as friends and family attended the unveiling of his portrait during a special session of Superior Court in Columbia.

Attorney Wendell Hutchins of Plymouth recited some of the honoree’s activities after opening his law office in Columbia in 1968.

David Gadd of Raleigh, who began his career with Ogletree, presided over the unveiling, and Angie Sexton, clerk of Superior Court for Tyrrell County, accepted the portrait on behalf of the county.

Ogletree thanked his paralegals, Mozella Roughton and Martha Blount Simpson, and several others as he recalled a few incidents, most them humorous, during his time in Columbia.

A reception followed in the Waypoint Oyster Bar.

The Ogletrees moved their residence to Greenville in 2017.

On May 15 the Tyrrell County Sheriff’s Office arrested Joshua D. Lowery, 29, of Pembroke, an inmate at Tyrrell Prison... read more