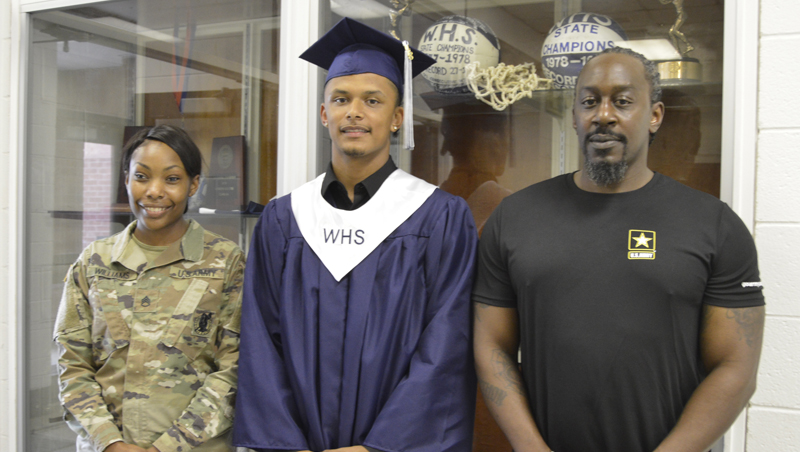 CARRYING ON TRADITION: Emanuel Corey, center, is pictured here with his father, Reginald Corey, and his recruiter, Sgt. Danielle Williams. Emanuel will follow in the footsteps of his father and brother as he enlists in the U.S. Army. (Matt Debnam/Daily News)

When Emanuel Corey was a child, military service had a profound impact on his life. Living abroad in Germany, Belgium, Spain and France, Corey was able to experience the world in a way that not many young people can.

Moving from one country to the next where his father, Reginald Corey, was stationed in the U.S. Army, Emanuel pictured himself joining the Armed Forces.

This summer, that aspiration will come to fruition as Emanuel ships out to Fort Jackson for basic training. Following in the footsteps of his father and brother before him, Emanuel will become the third member of his immediate family to serve in the Army.

His father graduated from Washington High School in 1994, and joined up himself. This summer, 24 years later, his second son will do the same. Emanuel’s elder brother, Malic, is currently stationed in South Korea.

Moving forward, Emanuel says he sees the Army as a career path. Going into the service, he will begin that career as a logistics specialist. His recruiter, Sgt. Danielle Williams, says that she sees great potential in the young recruit.

“I see that he is going to make a good soldier,” Williams said. “He’s physically fit, very respectful and ready to make a great career. It’s a great opportunity for him.”