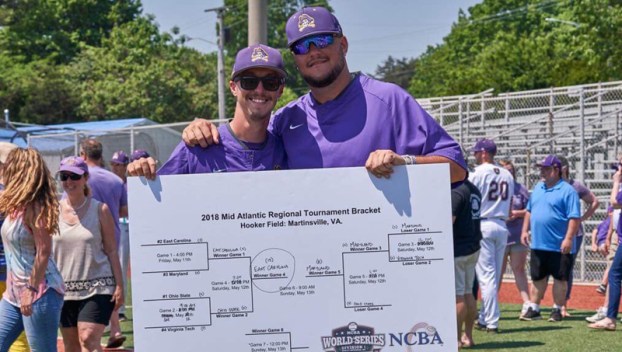 Today the East Carolina club baseball team begins its attempt at defending its National Club Baseball Association World Series title. The opportunity to win consecutive championships comes at the end of a regular season campaign that saw the ECU club baseball team finish 21-4, before breezing through the Mid-Atlantic Regional in Martinsville, Virginia undefeated.

A 15-8 victory over Maryland in the final booked ECU’s ticket to the NCBA World Series for the fifth straight year. A pair of Washington natives, Ben Fox and Hatteras Brooks, has helped guide a squad that returned only nine players from last year’s title–winning team back to the championship tournament with hopes of repeating as champions.

Fox, who graduated from Washington in 2006, and Brooks, a member of the 2011 Pam Pack graduating class, serve as head coach and pitching coach, respectively, for ECU. While the duo has worked together on the team for three years now, with Brooks being the team’s pitching ace those first two years, they have known each other a lot longer than that.

“I met Hatteras when he was probably eight years old,” said Fox, whose childhood best friend was the older brother of Brooks’ best friend. “I feel like that Hatteras is like a little brother to me. It’s a pleasure having him help me coach now.”

Fox isn’t alone in that sentiment, as Brooks looks to him as a brother as well.

While Fox says Brooks has done a great job as a first-year coach and is excited about the coach he can become, Brooks wasn’t so sure he wanted to trade in his glove for a whistle.

“Honestly, at the beginning of this year I wasn’t going to coach because I felt like I wasn’t going to enjoy it as much as I did playing,” Brooks said. “But once I got out there, the ability to take my knowledge and teach younger guys the game of baseball, mentally and physically, just blew me away by how much I thoroughly enjoyed it. I absolutely enjoy coaching now and look forward to being able to do it for the rest of my life.”

The baseball knowledge and passion for the game both these men possess comes from their upbringing in Washington, starting with little league baseball all the way to playing for the Pam Pack. For Brooks, his freshman and sophomore years at Washington were especially crucial to his baseball development. He said former Pam Pack baseball coach Darin Vaughan “taught me a lot about the game of baseball.” Vaughan is now an area scouting supervisor for the Atlanta Braves.

Fox credits his family for the passion he has for baseball, including his cousin Bryan Woolard, who won a state title with Northside before tragically dying in a car crash.

“My family really influenced me, influenced my love of the game,” Fox said. “I had a cousin that was a state-champion catcher; my grandfather was always a coach and my dad was a coach. I guess their love for it came into me.”

No. 2 ECU opens its title defense today with a game against No. 7 Penn State at 2:45 p.m. in Holly Springs.