PITCHING ACE: Northside’s Zach Woolard watches a pitch into the catcher’s mitt. The senior was a steadying presence on the mound for the Panthers, collecting nine wins on the year. (Sean Finnerty | Daily News)

Beaufort County experienced an up and down baseball season in 2018. Many of the highs were supplied by Northside. Led by nine seniors, the Panthers picked up 17 wins in the regular season to take second place in the Coastal Plains 1A Conference. Northside advanced to the second round of the state playoffs, before being knocked out in heartbreaking fashion, walking home the winning run in the bottom of the 10th inning.

Washington, a member of arguably one of the state’s toughest baseball conferences in the Eastern Carolina 2A Conference, started off the season on a tear, winning 10 of its first 12 games. But unfortunately for the Pam Pack, it hit a late season swoon. Washington lost five of its last seven game to finish in a tie for fourth in the conference. Despite having a better overall record than all but two teams in the conference, the Pam Pack missed the post season due to its 6-6 record in conference play, as North Lenoir, West Craven, Greene Central and South Lenoir received invitations to the postseason tournament instead.

2018 was a bit of a step back for the Southside Seahawks. After finishing last year 12-11 and making the playoffs, Southside regressed to an 8-13 record this season. What makes it tougher for the Seahawks is the fact that key players like Brantley Cutler, Cody Modlin, Will Warren and Demitrius Ebron are graduating.

Flying under the radar was the Eastern Christian Homeschool baseball team. Despite not belonging to a conference, and thus not eligible for a postseason tournament, TEACH still had the motivation to finish 18-1 on the year.

Even though most of the teams in the county didn’t achieve the success they hoped for, there were still talented ball players all throughout the area showcasing their skills during the spring. The Washington Daily News would like to honor the following standouts.

Zach Woolard collected the most wins among pitchers from Beaufort County who played for NCHSAA schools this season, finishing the campaign with a 9-1 record. The senior pitched the most innings (55.1) of any pitcher in the area, while sporting a 1.77 ERA, which is the lowest amongst county pitchers who’ve pitched at least 20 innings. The North Carolina Wesleyan College commit also racked up 65 strikeouts on the year, good for second in the area.

Cooper Anderson’s .333 batting average was good for fourth-best on Washington and tops among all catchers in Beaufort County. His 14 runs scored placed him in a tie for second-most on his team. But Anderson might’ve been most impactful behind the plate. The senior helped Pam Pack pitchers Logan Everette, Chris Sulc, Tyler Harrell, Hunter Hall and Frederick Holscher combine for 161 strikeouts on the year and limit opposing batters to a .173 batting average, all while committing only one error on the season.

Zach Griffin was the most consistent hitter among the first basemen in the county, hitting .407 in 2018, while knocking in 17 runs, third-best on Northside. He was also almost automatic on defense, posting a .942 fielding percentage. Griffin also made an impact on the mound, collecting the most strikeouts (76) in the area in 40 innings of work.

Chris Sulc was one of the key players at the plate for Washington. He led the Pam Pack in batting average (.444), hits (24) and runs scored (19), while his 14 RBI ranked second-best on the team. Sulc was also dynamite with a glove in his hand, finishing the year with a .971 fielding percentage. Not content with just hitting and playing defense, the senior also picked up three wins on the mound and collected 42 strikeouts in 32 innings.

WILL WARREN, THIRD BASE, SOUTHSIDE

Will Warren’s 24 hits were good enough to tie Brantley Cutler for the most on Southside. Warren also finished second among the Seahawks in RBI (18) and doubles (4), while having the third-best batting average (.364). He also proved himself to be adept with a glove, posting a .906 fielding percentage. Warren also finished the year with a 1.77 ERA in eight appearances, striking out 17 batters in 27.2 innings of work.

Reg Bishop is a player who contributed in a variety of ways for the Panthers. Bishop led Northside in hits (35), runs scored (30), doubles (4), triples (2) and stolen bases (15), while his .473 batting average and 21 RBI both ranked second-best on his team. And when he wasn’t making plays with a bat in his hands, Bishop was getting it done with a glove, sporting a .905 fielding percentage. The senior also posted a 2.33 ERA in seven appearances.

It’d be hard to find a player who had even more of an impact in all areas of the game than Brantley Cutler. The left-hander led Southside in batting average (.471), hits (24), RBI (21) and doubles (7), while having the second-most doubles and RBI and third-highest batting average and third-most hits in the county. Moving to the field, Cutler was perfect in the outfield, finishing the season with a 1.000 fielding percentage. The senior also collected 21 strikeouts in 15.1 innings of work on the mound. 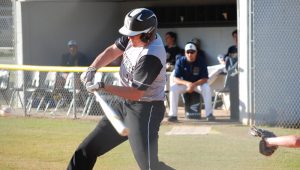 POWER HITTER: Panther outfielder Parker Boyd was one of the most prolific batters in Beaufort County in 2018. He led the area in batting average and RBI, while also providing good defense. (Sean Finnerty | Daily News)

Parker Boyd was one of the most productive batters in Beaufort County, leading the area’s players from NCHSAA schools with a .483 batting average and 25 runs batted in. He also ranked second among Northside batters in hits (28), runs scored (22) and doubles (3). Not just a strong hitter, Boyd also stole 10 bases on the year. Despite moving to the outfield after playing at first last season, it didn’t affect his defense as he posted a .964 fielding percentage.

While Cody Modlin wasn’t all that effective with a bat in his hands, hitting .210 over the course of the season, he did provide speed and defense to the Seahawks. His 12 stolen bases were second most in the county, finishing with the same amount as teammate Demitrius Ebron. Modlin also used his wheels to cover ground in the outfield. The senior completed the year with an almost perfect .976 fielding percentage, committing only one error throughout the season. 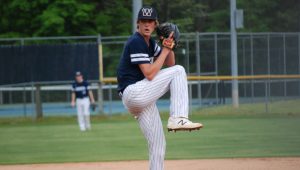 JUST MISSING OUT: Washington’s Logan Everette was a force on the mound for the Pam Pack. He finished with the third-most strikeouts in the county, just missing out as a selection for the All-Area First Team. (Sean Finnerty | Daily News)