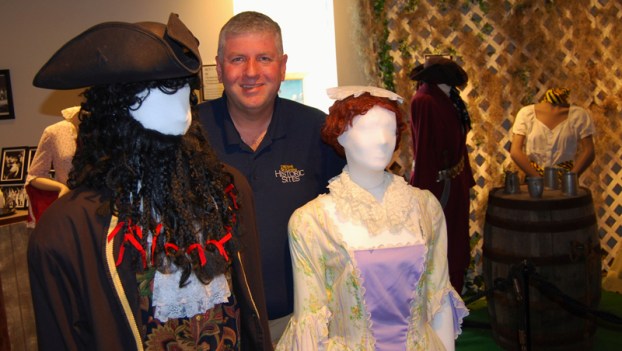 BEST DRESSED PIRATES: Chris Umfleet, site manager at Historic Bath, poses with a selection of costumes worn by actors in the local presentation, "Blackbeard: Knight of the Black Flag." The exhibit is one of two that can currently be viewed at the site; the other, a collection of "Queen Anne's Revenge" artifacts, will soon leave the area. (Kevin Scott Cutler/Daily News)

BATH — Anyone who hasn’t yet viewed historical artifacts associated with the pirate Blackbeard have just a few more days to do so before a traveling exhibition leaves Beaufort County.

The “QAR Shipwreck Archaeological Exhibit” closes May 31, according to Historic Bath site manager Chris Umfleet. The exhibit opened in Bath on March 1, and since then it has been viewed by an estimated 3,000 visitors to the site’s exhibition hall, located in the former Bath High School.

The exhibit is open free to the public from 10 a.m. to 4 p.m. The site is presently closed Sundays and Mondays. 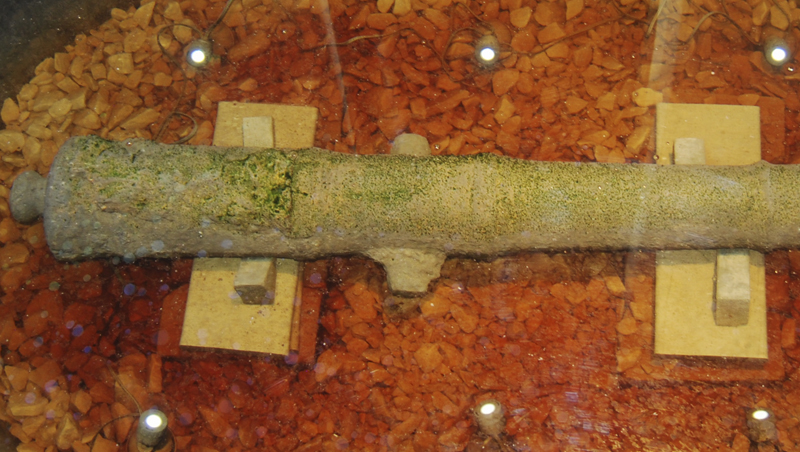 PIRATES ON THE PAMLICO: Historic Bath features two collections of artifacts and memorabilia associated with the infamous pirate Blackbeard. The pirate, killed in the waters off Ocracoke Island in 1718, made Bath his home. (Kevin Scott Cutler/Daily News)

The QAR collection is actually one of two Historic Bath exhibits. The second features a selection of costumes, props and memorabilia from “Blackbeard: Knight of the Black Flag.” The fictionalized account of Blackbeard’s ties to Bath was performed by local thespians, including runs in the 1970s and 1980s, according to Umfleet. That collection will remain on display until November, the 300th anniversary of the pirate’s death. 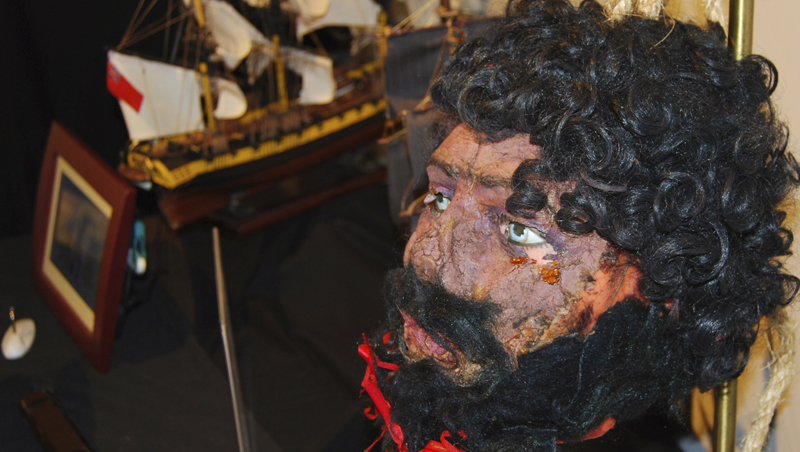 LOSING HIS HEAD: This paper-mache head, representing the pirate Blackbeard, was used in the original production of “Knight of the Black Flag.”(Kevin Scott Cutler/Daily News)

Once the QAR exhibit sets sail from Bath next week, there will be plenty of other offerings to entice local residents and visitors to Beaufort County, Umfleet promised.

Among them, the site will host a Buccaneers & Barbecue Festival on June 16, and an accompanying exhibit “History of BBQ in North Carolina” will be unveiled.

“There’s going to be barbecue advertisements, the history of barbecue as it came from the Caribbean to America, east-versus-west barbecue, wood-versus-gas,” Umfleet said of the exhibit. “We’re going to have a mock-up of an open-air barbecue pit, and the pork council is loaning us a three-dimensional model of a pig where the different meat sections come out.”

The barbecue festival itself will feature a cooking competition open to any nonprofit organization in Beaufort County, according to Umfleet. Barbecue pork, side dishes and desserts will be offered for sale, and live music by “Old Smoke” will be included in the festivities.

For more information about these and other activities offered by Historic Bath, call 252-923-3971 or visit the historic site’s Facebook page.

Life on the farm revisited during annual event

The days of life on a family farm of yesteryear were celebrated May 12 during the Eastern Antique Power Association’s... read more