Daughters of the American Revolution donate to Eagle’s Wings 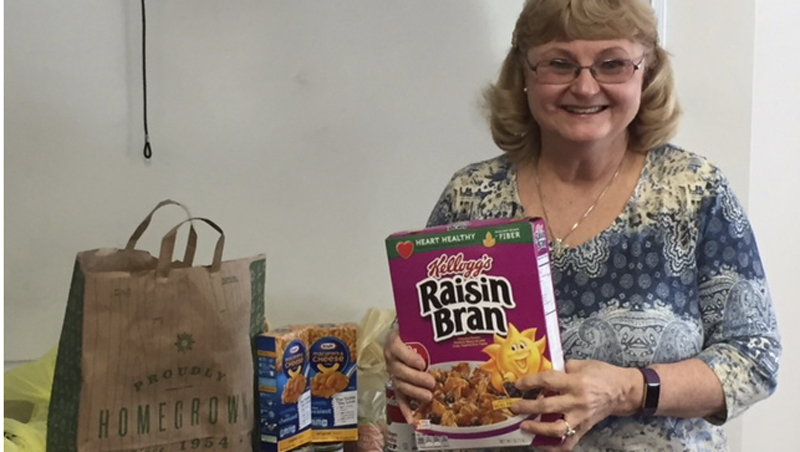 SERVICE TO AMERICA: Ann-Marie Montague, director of Eagle’s Wings Food Pantry, spoke at the May meeting about programs offered by the nonprofit. Montague was presented with a collected of non-perishable food items from DAR members. (Cathy Whichard)

The Major Reading Blount Chapter of the Daughters of the American Revolution met May 16 at the Brown Library in Washington. Regent Reid Solomon called the meeting to order and led the DAR Ritual, the Pledge of Allegiance, the America’s Creed and My DAR Pledge. Chapter officers and committee chairmen presented reports.

The National Defense Report was presented by Vice Regent Connye Dillon. The Anthem Veteran’s Memorial in Anthem, Arizona, was designed with five pillars bearing ellipses to represent the five branches of the military along with the United States seal. Each year on Nov. 11, Veteran’s Day, the sun’s rays pass through the ellipses of the five pillars to form a perfect solar spotlight over a mosaic of the Great Seal of the United States.

Anita Fletcher presented the Flag Moment. May 19 was Armed Forces Day. It was established by Harry Truman in 1949 to celebrate and offer thanks to military members for patriotic service to our country.

Ann-Marie Montague, director of Eagle’s Wings Food Pantry, was introduced to present a program based on our Service to America theme. Next year, 2019, marks the 30th anniversary of the incorporation of the food pantry which was started by an interfaith organization. The philosophy of the pantry is “friends and neighbors feeding friends and neighbors.” Over the years, the program has grown to meet the needs of the community as they have been identified. New programs recently added include WIC assistance and supplying food to the USDA designated food desert, Aurora. All of these services are provided without state or federal money. Ms. Montague was presented with a collection of non-perishable food items from the DAR members.