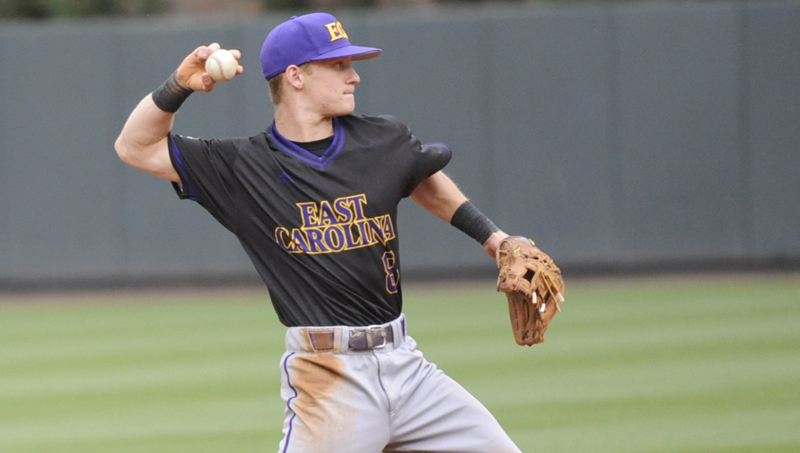 CLEAN DEFENSE: ECU's Turner Brown fields a ball at shortstop in a game earlier this season. Brown went 1-for-2 with an RBI in today’s 4-3 win over UConn to win the AAC tournament. (Michael Prunka | Daily News)

No. 15 ECU (43-16) also earned an automatic bid into NCAA Regional action next week as a host. The victory over No. 22 UConn (35-20-1) was the Pirates’ third win against the Huskies in their last ten attempts, but today’s game was the most important in that span.

“What Jake did in the third inning, I thought that was the key to the game,” ECU head coach Cliff Godwin said. “I thought we were pressing a little bit offensively. But the guys came out of the bullpen, Ryan Ross, Trey Benton and Davis Kirkpatrick, (and) did what they’ve done all year.”

With no runs scored in the game until the fifth inning, East Carolina plated three in the bottom of the inning to take the lead that it never surrendered. After Turner Brown walked and then stole second during Bryant Packard’s at-bat, Packard grounded out to advance Brown to third. This prompted the Huskies to pull starting pitcher Trevor Holmes, but C.J. Dandeneau, who came in relief, nailed Dwanya Williams-Sutton and put him on base as well.

Spencer Brickhouse stepped up to the plate and singled to right field, bringing the Pirates’ first run across home plate. Jake Washer followed suit, as he hit an RBI single to left field that scored Williams-Sutton. Andrew Henrickson made it a trio of singles in the Pirates’ next at-bat, as he brought Brickhouse home with a base hit to center field.

Taking the lead into the top of the sixth, UConn cut the lead to one run after Chris Winkel singled to right field to bring home Troy Stefanski for the Huskies. Two batters later, Conor Moriarty hit a sacrifice fly to center to score Michael Woodworth.

The winning run for the Pirates came in the bottom of the sixth inning. Brown hit a sacrifice fly that saw Brady Lloyd reach home after he opened the inning with a leadoff single to left field.

UConn hung around, however, as the Huskies saw their third run come across in the top of the eighth inning off Kirkpatrick. After Benton was pulled following a leadoff walk to Stefanski, Kirkpatrick got Woodworth and Winkel to fly out and strike out swinging, respectively, before giving up a RBI double to Christian Fedko. But Kirkpatrick limited the damage done, ending the inning by getting Moriarty to fly out.

That was the Huskies’ last real shot at scoring more runs. After UConn quickly retired the side in the bottom of the eighth, UConn put one man on base, Zac Susi, in the top of the ninth. Lead off man John Toppa flew out, Anthony Prato struck out swinging, and the last hope for the Huskies, Isaac Feldstein lined out to Henrickson to end the game.

“We showed a lot of toughness. We’ve faced a lot of adversity this year with some injuries and sicknesses. They’ve answered the bell every single time. We like to call ourselves blue collar and the guys did a great job,” Godwin said.

In the win, Ross pitched one inning and allowed two earned runs on three hits, with one walk and no strikeouts for his third win of the season. Agnos pitched the first four innings the contest, allowing no runs on six hits and notching nine strikeouts. Benton and Kirkpatrick threw two innings apiece and gave up one run on two hits together, while striking out four batters.

Since joining the AAC in 2015, which was also Godwin’s first year coaching the Pirates, the team has made the title game three times, winning it twice. ECU won it that same year, defeating the University of Houston. This year’s victory also saw the AAC give Brickhouse the Most Outstanding Player Award. He went 10-for-20 in the tournament and 2-for-4 with a RBI in the title game.

ECU is one of the top 16 teams that will host three other teams in a double-elimination tournament inside Clark-LeClair stadium, as part of the NCAA’s 64-team postseason baseball tournament. All hosts and tournament participants will be announced in the coming days.