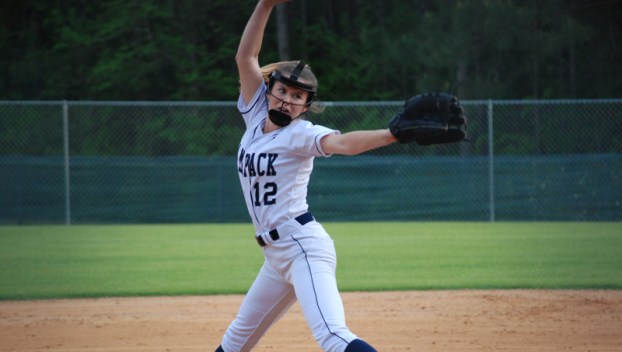 STAR PITCHER: Washington’s Abbi Tucker winds up to throw a pitch earlier this season. The sophomore was one of the most impressive players in 2018, winning 16 games with a 1.14 ERA, striking out 170 batters in 111 innings and throwing a no-hitter in the playoffs. She looks to be a fixture on this list her remaining years in high school. (Sean Finnerty | Daily News)

Beaufort County was treated to quite the softball season in 2018, with both veteran players living up to their reputations and newcomers making names for themselves. Washington and Northside proved themselves to be the top teams in the area, with both squads winning multiple games in the state playoffs.

The Pam Pack, fresh off of losing nine seniors, reloaded and went undefeated in conference play to win the Eastern Carolina 2A Conference, while losing only one game in the regular season. And it wasn’t as if Washington’s non-conference schedule was full of cream puffs. The Pam Pack faced off against teams that made it to the postseason, such as Northside, Midway, Bertie, D.H. Conley and Topsail.

Northside might’ve started the season off slow, losing four of its first five games, but the Panthers closed the season out on a strong note. Northside finished the year with an 18-6 record, including one loss in conference play. The Panthers then made a run to the fourth round of the playoffs, eliminating top-seeded East Carteret along the way.

2018 will probably go down as a slight disappointment for Southside. The Seahawks finished the year with an 11-7 record, but just missed out on the playoffs, leaving them unable to repeat last year’s feat of winning a playoff game. But despite not quite having the success of last season, Southside still had some strong performers this year.

Elsewhere, Pungo Christian Academy had a solid season that ended up with a trip to a postseason tournament. Unity Christian Academy, in its third year with a softball program, continued its growth, finishing undefeated for the second year in a row.

There’s an abundance of softball talent in Beaufort County that showcased their skills this season. The Washington Daily News would like to honor the following softball standouts.

Abbi Tucker was a force to be reckoned with in the pitcher’s circle in 2018. The sophomore won 16 games in 19 appearances, posting a 1.14 ERA and holding opposing players to a .127 batting average. She mowed down batters all season long, racking up 170 strikeouts, the most for any pitcher in Beaufort County, in 111 innings of work. Tucker also showed she can elevate her game as the stakes are raised, throwing a no-hitter in a 7-0 win over Reidsville in the first round of the playoffs.

Stepping into a starting role as a sophomore, Emme Davis showed she belonged. Davis’ .515 batting average led the Pam Pack and was second-highest in the county among players of NCHSAA schools. Her 35 hits were tied for third-most in the area, trailing only two of her teammates, while her 23 RBI were second-most on Washington and fourth most in the county. Davis also proved to be a more than reliable backstop for fellow sophomore Abbi Tucker. 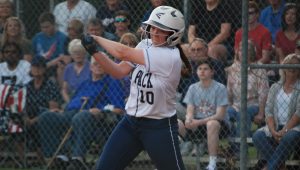 NEW ROLE, NO PROBLEM: The Pam Pack’s Haylee Simpkins takes a swing earlier in the year. The senior stepped into a starting role this year and didn’t skip a beat. She hit .333 on the season and provided a solid glove at first base. (Sean Finnerty | Daily News)

Haylee Simpkins was a consistent performer for Washington in 2018. The senior batted .333 on the year, the best among first basemen in Beaufort County, while knocking in 12 runs and hitting two doubles as well. She also provided a steady presence on defense, not committing a single error during the season.

Rebekah Williams was defensively flawless in the 2018 season. The senior had a perfect 1.000 fielding percentage and didn’t commit an error all year. She also proved herself adept with a bat in her hands, hitting .319 and knocking in 10 runs while scoring 14 runs herself. Williams also contributed as a pitcher, winning five games in 10 appearances and striking out 32 batters in 29.1 innings.

Whittney Cromwell was a monster at the plate in 2018. Among players on NCHSAA schools, she led the area in batting average (.525), RBI (33) and doubles (11), while her 32 hits were second-most on Northside. Not just a threat at the plate, Cromwell showed she could get it done with her glove as well, making some crucial plays in the Panthers’ third-round playoff game against Camden County.

Also taking over a starting position after the Pam Pack’s mass exodus of seniors, Summer Campbell proved she was ready for the spotlight. The junior finished with the third-highest batting average (.500) on Washington, while scoring the most runs (37) and tying for the most hits (38) in Beaufort County. And Campbell wasn’t just hitting singles either. She led the area with five triples, led her team with eight doubles and finished the year with 20 RBI and two home runs, as well.

There might not be a faster player than Rylie Newman in Beaufort County. The senior stole 29 bases in 2018, tying her for the most in the area. Newman also uses her running ability to cover ground in centerfield, providing solid defense for the Panthers. But she has more in her toolbox than a set of wheels. Newman’s .559 on-base percentage was fourth-highest in the county, and she finished the year with a .409 batting average.

Perhaps the one player who could best Rylie Newman in a foot race, Symone Ruffin swiped 29 bases this year to tie for the most in the county. The senior also led Southside in batting average (.442), hits (23), doubles (5) and runs scored (25), while tying for the team lead with two triples. Her 16 RBI were good enough for second most-among the Seahawks. Her speed allows her to reach almost everything hit her way, as she finished the season with a .925 fielding percentage.

One of the younger starters for the Pam Pack, Kaylee Elks supplied power at the plate for her team. The sophomore led the area’s players from NCHSAA schools with three home runs in 2018. Elks also led Washington with 24 RBI and smacked six doubles as well. Showing she’s not just about power, she finished the season with a .318 batting average. 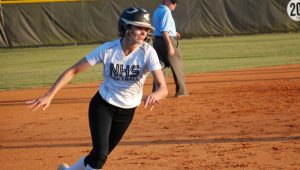 Beaufort County experienced an up and down baseball season in 2018. Many of the highs were supplied by Northside. Led... read more