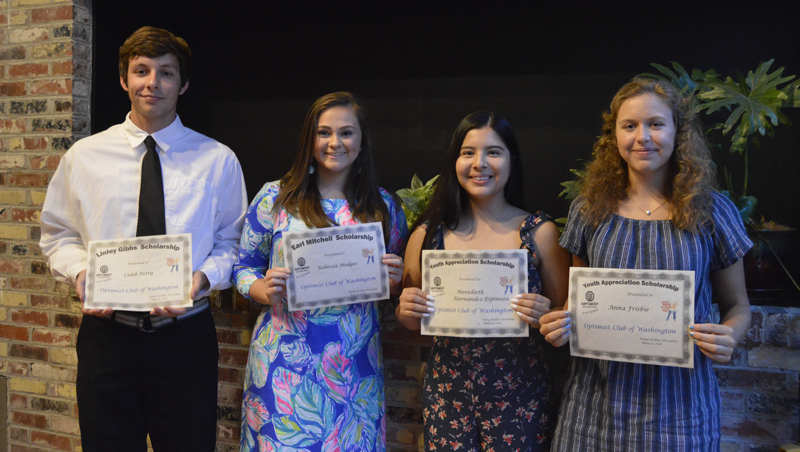 For those who have never read it, the Optimist Creed is a set of 10 promises which members of the Optimist Club are encouraged to make to themselves. Focusing on inner strength, cheerfulness and an optimistic outlook on the world, these principals of positivity help guide the actions and attitudes of Optimists worldwide.

In reflecting and writing on the words of this creed, four local high school seniors will enter their freshman year of college with $1,500 in scholarships from the Optimist Club of Washington.

Caleb Petty, recipient of the Linley Gibbs Scholarship, will graduate high in his class at Southside High School, where he has played on the soccer and basketball teams. An avid musician, Petty plans to attend Belmont University, where he will study commercial music. He was a participant and referee in the Optimist Club League for four years, in addition to numerous other volunteer experiences.

The Youth Appreciation Scholarship was awarded to two recipients this year; Anna Frisbie and Meredith Hernandez-Espinoza.

Hernandez-Espinoza, a graduate of Beaufort County Early College High School, plans to attend Campbell University next year, pursuing a degree in nursing. A volunteer for various causes, including Vidant Beaufort Hospital, the Blind Center, the Coastal Pregnancy Center and Eagle’s Wings Food Pantry, she has been active in Optimist club sports as an athlete and referee, as well as working in the group’s concession stand.

Frisbie, like her peers, will be graduating in the top of her class at Washington High School. She plans to enroll at the University of Richmond, studying marine biology. A volunteer at the animal shelter and various events at local elementary and middle schools, Frisbie has played soccer at WHS for all four years of high school. She too was a member of the Optimist Club league as a player and referee.

While the scholarships are a much-welcomed boost for the college-bound seniors, for the Optimist Club of Washington, the practice of giving scholarships dates back for the better part of two decades.

The Optimist Club is best known for its involvement with youth sports, managing a soccer league which serves approximately 600 children each year, as well as sponsoring local youth softball, baseball, football and basketball teams.

All told, the Optimist Club of Washington has raised and spent more than $1 million on local children and youth since its founding in 1975. The club is supportive of many causes dedicated to the wellbeing of children, including local scout troops and fundraisers to establish recreational facilities.