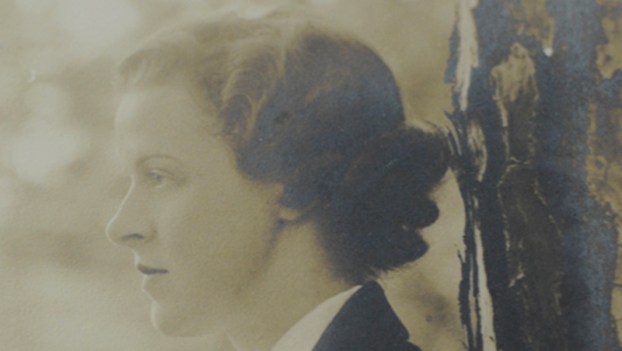 PAST TO PRESENT: Among Sabin Leach’s family photos is this one of his aunt, Edith Leach Snow, as a young woman. A Duke graduate, she later became a benefactor of her alma mater, setting up two funds, one in honor of her father, George Thomas Leach, owner of Eureka Lumber Company, which operated in Washington for many years. (Vail Stewart Rumley/Daily News)

Edith Leach Snow was born in Washington, one of six children of George Thomas and Julia Earle Leach. Her father was the president of Eureka Lumber Company; she grew up on West Main Street and attended Washington city schools before heading off to Duke University, following in the steps of an uncle and two siblings.

“We’re Duke through and through,” said Sabin Leach, Snow’s nephew.

That sentiment became clear to Leach when he received a letter from the university, spelling out that a trust started by Snow upon her death was recently donated to the school to create the George Thomas Leach Associate or Assistant Professorship Fund — paying salary, benefits and other expenses related to teaching or research to a selected scholar in forestry or ecological sciences. The $1.5 million donation was made in 2014, after the death of Snow’s son, Sabin Tucker Snow. Its first distribution of $42,431.19 was made this school year.

“I’m very proud of what she did for Duke in establishing the fund for the chapel and this scholarship. I think it was very meaningful that she designated this money to go to the School of Forestry since my grandfather was in the lumber business,” Leach said.

George T. Leach, along with George A. Phillips and W.T. Campen, was one of the owners of Eureka Lumber Company, the largest sawmill operation in Washington at the turn of the 19th century. In 1956, the company was purchased by Weyerhaeuser, then closed. Decades before,

Snow and her husband Brewster graduated from Duke; after their 1932 graduation, the two were married at First Presbyterian Church in Washington. Brewster Snow would later teach at Duke’s College of Engineering, and it was during this time the couple became friends with James T. Cleland, minister for the University and dean of the Duke University Chapel. It was the Snows who donated the seed money for the James T. Cleland Chapel Endowment Fund in the 1970s, which continues to be used today for special chapel programs and projects for which funds are not usually available, supporting worship services, hospitality and professional development and travel for the staff.

“The 40,000 that Aunt Edith gave was just seed money to get the thing started,” Leach said.

The Cleland fund now has a market value of more than $2.3 million, and since 2000, a total of $1.314 million has been distributed to support the Chapel, its programs and staff.

Leach said he only learned of the endowment set up in his grandfather’s name when her received an update about the first distribution of funds from the endowment’s administrator. Leach, along with his brothers Dick and Jimmy — also Washingtonians — and a sister, Elizabeth Lyon Leach, are now Snow’s sole survivors.

“We never lived in the same vicinity, but of all my aunts and uncles, I think I was closest to her,” Leach said.

Leach said he plans to add the endowment information to a collection of family history at Brown Library.

Forecasters predict a near- or above-normal 2018 Atlantic hurricane season