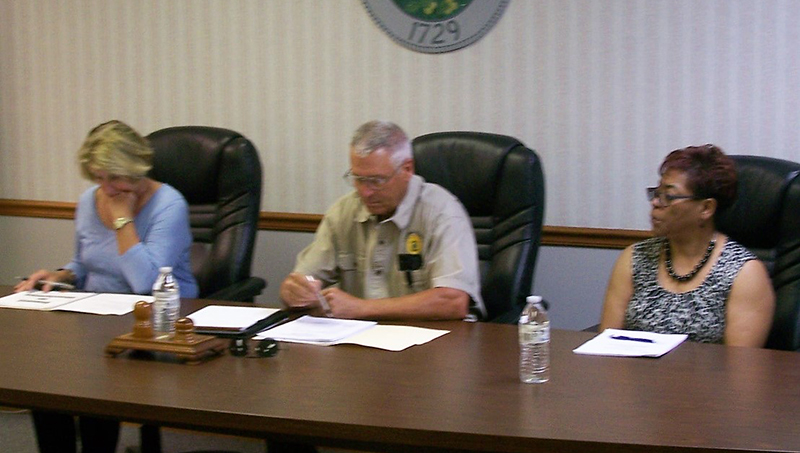 The Tyrrell County Board of Elections on May 25 found no probable cause to investigate a charge that Kevin Sawyer, Democratic candidate for sheriff, fails the residency requirement to run for that office. From left are Debbie Huth, Cecil Lilley (chairman), and Inetta Knight. Buddy Swain was absent. (R. McClees photo)

Joey Elliott said Friday afternoon he intends to appeal a decision by the Tyrrell County Board of Elections that found no probable cause to investigate his charge that Kevin Sawyer, Democratic candidate for sheriff, is ineligible to run for the office.

Elliott trailed Sawyer 360 to 247 in the May 8 primary, while Nathan McPeak garnered 208 votes. Because Sawyer’s plurality was greater than 40%, he was declared to be the party candidate. No Repulbican or unaffiliated candidates emerged, so Sawyer’s win is tantamount to election in November.

Moreover, neither Elliott nor McPeak can run as a write-in candidate in the general election this fall.

Elliott filed a 33-page protest on May 22, and the elections board scheduled a probable cause hearing for May 25, at 11 a.m.

Elliott alleges that Sawyer “was not a resident of Tyrrell County one year prior to the election” and cites Section 162-2 of the General Statutes as the law violated. That section, originally passed in 1777, states, “No person shall be eligible for the office of sheriff who is not of the age of 21 years, or has not resided in the county in which he is chosen for one year immediately preceding his election.”

Elliott asked that “Sawyer be disqualified from the sheriff’s election before taking office.”

The protest document alleges that Sawyer’s home address was in Washington County on March 1, 2017, and that he registered to vote in Tyrrell County on August 7, 2017.

Elliott asked the elections board to ascertain whether Sawyer notified the Division of Motor Vehicles on or before July 7, 2017, that his address had changed to a location in Tyrrell County. “If the license was obtained from NCDMV after July 7, 2017, I am requesting that Candidate Roy Kevin Sawyer be removed from the ballot based on the fact that he has not resided in Tyrrell County for one year prior to the election on May 8, 2018 and is not eligible to be sheriff as prescribed by NCGS 162.2,” Elliott’s protest states.

Chairman Cecil Lilley convened the probable cause hearing at 11 a.m. on Friday in the county commissioners’ meeting room. Elections board members Debbie Huth and Inetta Knight were also present, along with county attorney David Clegg. Board member Buddy Swain was absent, reportedly in Ireland.

Elliott, McPeak, Sawyer, and some family members of the candidates were seated in the audience section.

The board decided that Elliott’s protest was in proper form and timely filed, leading then to the question whether it, and it alone, contained probable cause to investigate the alleged irregularity.

The board gave no reasons for its decision, and Clegg said none is required.