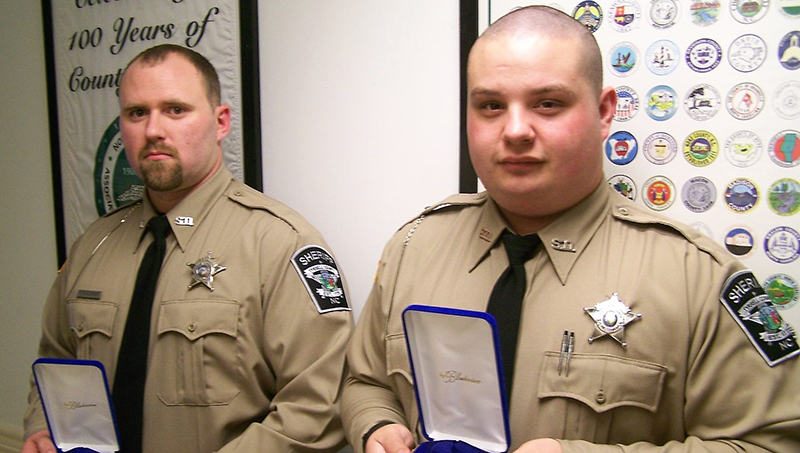 Tyrrell sheriff's deputies James Howell (left) and Terrance Flaugher were presnted the Award of Excellence and Life Saving Star on May 21 for saving the lives of a motorist and his dogs from drowning in a canal near Alligator River Marina two months ago. (R. McClees photo)

Two Tyrrell County sheriff’s deputies were presented the Award of Excellence and the Life Saving Star by Sheriff Darryl Liverman in a ceremony witnessed by family members and the county commissioners on May 21.

Deputies Terrance Flaugher and James Howell were cited for heroism in rescuing James Carpio Jr. and his dogs from a vehicle that was rapidly filling with water in a canal beside U.S. 64 near the Alligator River Marina around 2 a.m. on March 21.

Deputy Howell arrived on scene first and observed Carpio and two dogs trapped in a vehicle overturned in the ditch and taking in water. Without hesitation, Howell jumped into the water and immediately started rendering aid to Carpio and his dogs.

Flaugher arrived and also went into the water. After attempting unsuccessfully to open the doors, Flaugher used his ASP baton to break the passenger-side window, and he and Howell removed Carpio, with only minor injuries, and his animals to the road shoulder to receive paramedic assistance.

“The deputies showed great compassion, quick thinking and outstanding decision-making skills on this day,” Sheriff Liverman stated. “They have brought great honor to this office and all of its employees.”

After the sheriff read the citation, Sgt. Raymond Allen presented the Award certificate and Life Saving Star to each officer and all present stood and applauded.