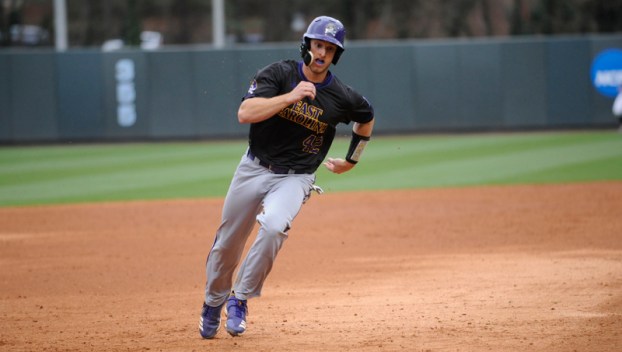 RUNNING HARD: ECU's Spencer Brickhouse runs the base path earlier in the season against UNC. Brickhouse had an RBI and scored two runs in the 16-7 win over UNCW last night. (Michael Prunka|Daily News)

GREENVILLE — East Carolina matched a season-high of 17 hits and scored 16 runs en route to its opening game victory over the University of North Carolina-Wilmington in the Greenville NCAA Baseball Regional yesterday.

After scoring four runs in the bottom of the first inning, the Pirates, the top seed in the regional, scored at least one run in all but one inning of the game. The victory advanced ECU to the winner’s bracket to play the University of South Carolina today.

Although the Pirates tied for their most hits of the season in the game, the victory was not smooth sailing. ECU head coach Cliff Godwin turned to Chris Holba, who has arguably been the best starting pitcher for the club this season. But the right-handed hurler struggled, allowing six runs on eight hits in 4.1 innings before being pulled for senior reliever Ryan Ross. Thanks to the Pirate offense, and Ross’ stellar 2.1 innings of work, ECU expanded its lead and Ross picked up the win. Ross allowed just one earned run on one hit and picked up five strikeouts, the most for a Pirate pitcher in the game.

The Seahawks stalled in naming their starting pitcher on the day of the game, before some media outlets reported that UNCW would turn to Alex Royalty. It was speculated that head coach Mark Scalf wanted to give the Pirates the least time to prepare for who they’d face on the mound in an attempt to give an advantage to the Seahawks. However, that backfired immensely.

Royalty lasted just two innings and gave up eight runs on seven hits, while facing 16 batters. He got knocked up early, giving up four runs in the opening frame, but seemed to settle down a bit after just giving up one run in the second. However, he could not carry that into the third inning and gave up three more runs to put the Seahawks in a 7-3 hole. He did not record an out in the third inning and threw 71 pitches in that short span before being pulled for reliever Austin Easter. Easter pitched 1.2 innings before UNCW used four more relievers throughout the game to try and find an answer to ECU’s offense.

After a leadoff single in the game for Bryant Packard, Spencer Brickhouse reached base after being hit by a pitch. Jake Washer drove in the first run of the game with a single up the middle. Andrew Henrickson knocked in another run in the opening inning before Connor Litton smacked his ninth home run of the year to right field, scoring two more runs.

“It’s was one of those things where you don’t get many of those opportunities too much,” Litton said. “But when you can fire up the crowd like I did, the other team is going to look at it like 5,000 people cheering for us.”

Turner Brown scored the lone run in the bottom of the second off a Dwanya Williams-Sutton groundout, before Henrickson scored on a wild pitch in the bottom of the third. Alec Burleson and Brown each hit sacrifice flies to bring home Litton and Lloyd in the third to increase the Pirates’ lead to four runs at 7-3.

“I thought our offense played really well tonight and we played really good defense, and we needed it,” Godwin said. “But our offense kept scoring, because UNCW kept answering, and for our guys to keep tacking on, it kept us from having to keep going to our bullpen even more and kept the momentum in our dugout.”

ECU hopes to have its sell-out crowd back this evening when it faces the University of South Carolina at 5 p.m. for a championship game berth.

CHOCOWINITY — Despite not making a third-consecutive trip to the 1A eastern regional championship, Southside’s 2017 football season shouldn’t be... read more