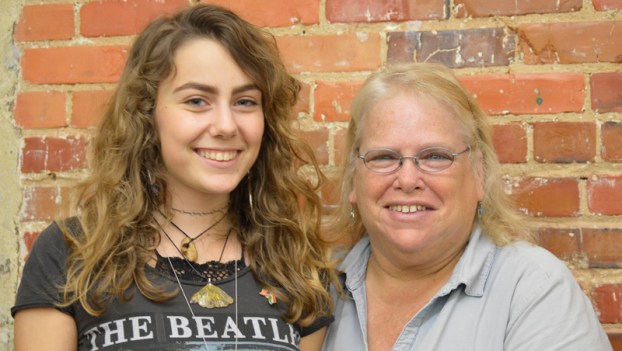 When Alex Vegh arrived in Washington from Hungary, she spoke some English and came to the area with some pre-conceived notions of American culture.

Ten months later, after spending a school year at Washington High School, she will go home with a greater knowledge of America and a fluent mastery of the English language. For the past year, Vegh has resided with Washington resident Nancy Campbell as a part of the Nacel Open Door exchange program.

“I wanted to study English and coming to America was my dream,” Vegh said. “I came and shared my culture a little bit with Americans and also received American Culture. Now I can speak English fluently.

Making to most of her time at WHS, Vegh became involved in sports, theater, the arts and a wide variety of activities. A senior at WHS, Vegh is ineligible to graduate in the U.S. and will have to return to Hungary to complete her education. She plans to return to America for college, however, with hopes of enrolling at East Carolina University.

“I received a new perspective of the world,” Vegh said. “I became more independent, braver, smarter ­— more like an adult.”

While Vegh has learned a lot during her time in Washington, Campbell says that the experience of being a host parent has been equally insightful for her. Having been involved with foreign exchange students for most of her life, Campbell says that getting to know these students and their respective cultures has greatly enhanced her own life.

“It just opens up my world just like it does their world,” Campbell said. “You see things in a different way. It’s very rewarding.”

Students in the NOD program range from 15 to 18 years old and come from approximately 35 countries worldwide. Spending either five or 10 months in the US with their host families, students immerse themselves in the local culture, attending high school in the host family’s area.

Families are expected to provide room and board for students, including three meals each day. Students are provided with their own health insurance and have money to purchase toiletries and other basic needs.

Celebrating a cumulative 739 years of service to public education, Beaufort County Schools bid farewell to many of its longest-serving... read more