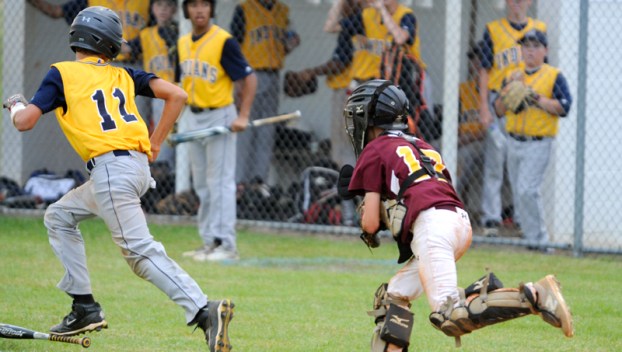 KIDS AT PLAY: Players from Bath and Chocowinity middle schools compete during a tournament game at last year’s Beaufort County Brawl. The BCS school board will hold a vote whether to allow sixth-graders the opportunity to try out for middle school sports teams, other than football. (Ashley Vansant | Daily News)

For the longest time, sixth graders in North Carolina were not allowed to compete in middle school athletics. But that changed in August 2016.

The State Board of Education revised North Carolina’s Interscholastic Athletics Policy, permitting sixth graders to participate in all middle school sports, except for football. It was then left up to the school districts to determine whether they wanted to allow sixth grade students to take part in sports in their respective school systems.

Fast-forward almost two years and Beaufort County Schools is now wrestling with the idea to allow all middle school students to have the opportunity to play for their school teams (S.W. Snowden is already allowed to use sixth graders on its sports teams due to the fact it wouldn’t have enough students to fill out its squads otherwise).

For me, it is a no-brainer that sixth graders should be allowed to participate in middle school sports, and I was surprised to find out they currently weren’t allowed to even try out.

But seeing as I have no background as a coach or an educator, I reached out to principals and athletic directors of BCS middle schools to get a better understanding of what are seen as the positives and negatives of the potential policy change. And after speaking with those more in the know of the issue, I still feel sixth graders should absolutely be allowed to participate in middle school sports.

I first want to make something clear. I’m not saying sixth graders should be handed spots on every school team, but rather they should be given the same chance as every other student at their school to try out in an attempt to make the team. Sports, after all, are supposed to be a meritocracy where those who prove themselves to be the best are rewarded as such.

While I feel sixth graders should be allowed to participate because I think every student at the school should be provided the same opportunities, there was another compelling argument I heard in favor of sixth graders playing in middle school sports. The possibility of being on one of the athletic teams during a student’s sixth-grade year provides incentive for students to maintain their grades, in hopes of staying eligible to play sports.

The reason against permitting sixth graders to play that made the most sense to me was that they aren’t developed enough to compete with older kids. But the thing is the policy change will only give sixth graders the chance to try out for teams, and not give them automatic spots on each squad.

That means only the sixth grade students who show they are good enough/physically developed enough to play with seventh and eighth graders, which honestly won’t be all that many, will actually make the team. Then all the sixth graders who didn’t make the cut can learn from the experience and work on improving themselves in hopes of making the team the following year.

Another argument against the policy change was fear of the schools needing more money due to more students being allowed to play sports. But as school administrators told me, this fear is misplaced due to the fact team rosters weren’t going to be expanded. Only the pool of students to select from was getting larger.

While I understand the thinking behind that argument against the policy change, the others I heard seemed more like the clutching at straws by people who are resistant to change. I heard reasons like rec leagues would suffer from lack of participation since sixth graders will now be playing for their school team (doubtful because very few sixth graders will probably make their school team), and coaches won’t know what sizes they should order for uniforms because the size difference between sixth and eighth graders can be so great.

One argument I didn’t care for was that not making the cut as a sixth grader could potentially cause those children to lose interest in sports. One may think they are protecting a child by not allowing them to try out, but it seems more like coddling.

One of the great things about sports is they can provide life lessons. And one of those lessons is that failure is a part of life. Sports can help children understand that fact and learn how to grow and improve from those failures, such as practicing to get better after not making the team on the first attempt.

But maybe the worst reason I heard about not allowing sixth grade students to play middle school sports was because coaches would then potentially have to deal with the complaining from parents of seventh and eight-graders who weren’t playing because a sixth grader took their child’s spot on the team.

Out-of-control parents are one of the worst things about youth sports. It’d be a shame if kids were denied the opportunity to play school sports for a year simply due to the fear of having to deal a mother or father who can’t cope with the fact that their child might not be as good of an athlete as they think.

I wasn’t able to touch on all the reasons I heard why sixth graders shouldn’t be allowed to play middle school sports, but I covered the ones I felt made the strongest points, as well as those I strongly disagreed with. But for me, it’s an easy decision to let sixth graders participate in school sports. For one, I believe every academically eligible student should have the same chance to try out for one of the school’s teams. I also believe, to quote the great former manager of the British soccer team Manchester United, Sir Matt Busby, “If you’re good enough, then you’re old enough.”

GREENVILLE — In control of the game, East Carolina let up nine runs in the fifth inning following a lengthy... read more