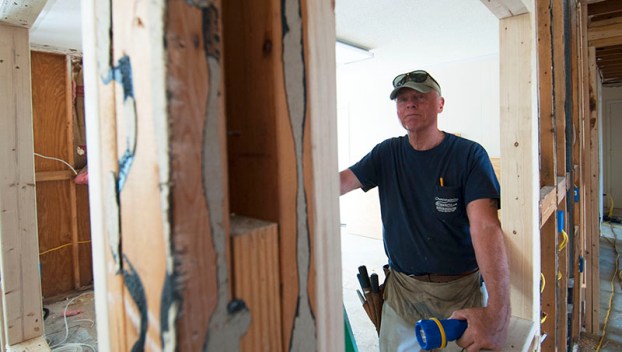 AT WORK: Tom Tyrell oversees the daily work being done on the Open Door Community Center on Cowell Farm Road in Washington. Renovation will be helped by a $100,000 grant included in the state’s 2018-2019 budget. (Vail Stewart Rumley/Daily News)

The proposed North Carolina budget for 2018-2019 tops out at $24 billion, and included in that number are several allocations intended solely for Beaufort County.

Open Door Community Center is listed as one. A homeless women’s and children’s shelter in the process of being built in Washington, the nonprofit is slated to receive a $100,000 grant from the state. According a statement from N.C. Senator Bill Cook, the grant will assist in completing renovations of the build and purchase some of the needed furnishings for the center. The announcement came as welcome news to Dot Moate, president of the Open Door Community Center board. 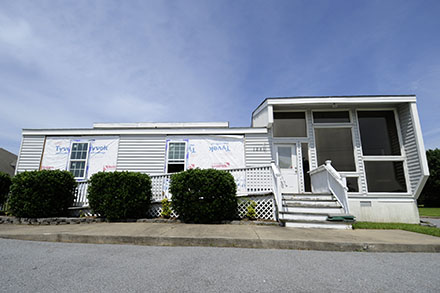 OPEN DOOR: The opening of Open Door Community Center is planned for the fall. The building’s completion means a shelter for homeless women and children, which has not been offered in Beaufort County in decades. (Vail Stewart Rumley/Daily News)

“We are very excited about it,” Moate said. “Bill promised that he would do something for us, and this is his last budget.”

Cook, in the midst of redistricting of District 3, has declined to run in the coming election.

The Open Door board purchased a building for $86,000 from the county earlier this year, but renovation costs were more than anticipated, according to Moate.

“It was more than we ever thought. It’s about $99,000, because there was a lot of rehab (to be done),” Moate said. “That’s about the cost to complete it, to put in the fixtures and appliances we need.”

The project has turned into a community effort.

TO THE STUDS: The Open Door Community Center is getting a major renovation as the building is transformed from its past life as a dermatologist’s office to its future life as a homeless women’s and children’s shelter. (Vail Stewart Rumley/Daily News)

“Mostly all the work that has been done there are from people in the community that have volunteered, from Chocowinity and Washington. Even our contractor is volunteer,” Moate said. “We’ve been very blessed with all the people supporting us either with their time or funds. We’ve been really lucky, but it’s going to be a never-ending process raising funds every year.”

The board plans to have Open Door Community Center operating by the fall; Moate said the next step for the community center is to find a grant writer to assist in the process of continual fundraising.

House and Senate Republicans reached an agreement on the 2018-2019 budget in May and Senate Bill 99, or the Appropriations Act of 2018, was presented to Gov. Roy Cooper on June 1. Cooper has the ability to veto the bill, however, with Republican majorities in both House and Senate, the veto can be overridden.

For members of the Beaufort County Branch of the National Association for the Advancement of Colored people, the cause of... read more