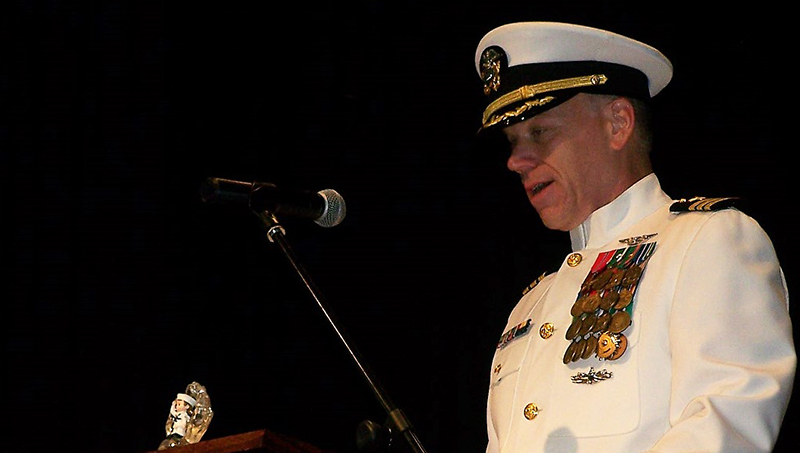 US Navy Commander Jack Morris was pricipal speaker at Memorial Day service in VanHorne Auditorium in Columbia on May 27. VFW post commander Dallas Simmons is at left. (R. McClees photo)

Commander Jack Morris, US Navy, was the featured speaker at the Memorial Day service in Columbia on May 27, sponsored by the Glynn T. Cahoon post of the Veterans of Foreign Wars.

He is executive officer of the Center for Naval Aviation Technical Training Unit in Norfolk, Virginia. The Hinesville, Georgia, native has been acquainted with Tyrrell County since he married into the Armstrong family of Gum Neck in 1989.

“Proof that America is greater than any one of us can be noted right here in Tyrrell County where patriotism is the norm,” Commander Morris pointed out. “I say this with certainty and can prove it with the history that resides around you.

“According to the last census, there are 4052 people residing here and 335 citizens are classified as veterans, which equates to 8% of Tyrrell County’s population. In our nation today, less than 1% of our population chooses to serve our freedom.

“History also reveals that the memorials in Tyrrell County list 35 men that have laid down their life in combat since World War I. The average loss in other counties across the nation is 22 veterans, during these same wars. This fact proves that the patriotism and sacrifice of this county runs deep.

“The men of Tyrrell County who have paid the ultimate sacrifice since World War I are:

“As we pause to remember these freedoms and their cost, we must also remember that each patriot we honor today died for a cause they considered more important than themselves. They died to defend a set of values that make us wholly American and make this country great.”

Commander Morris also reminded the audience of 63 county residents, “Each of us must make an asserted effort to insure the truth and history of those that died for this nation does not fade with time. We must teach the generations to come, so the sacrifice is never forgotten….Without guard, these sacrifices and historical truths are going the way of the revisionist history books.”

Commander Morris urged his hearers to “learn the hidden truths of our nation’s legacy and share it. We have an obligation to celebrate America’s freedoms, preserve America’s greatness and to teach about those she inspired to heroism, sacrifice, love of nation and love for one another.”