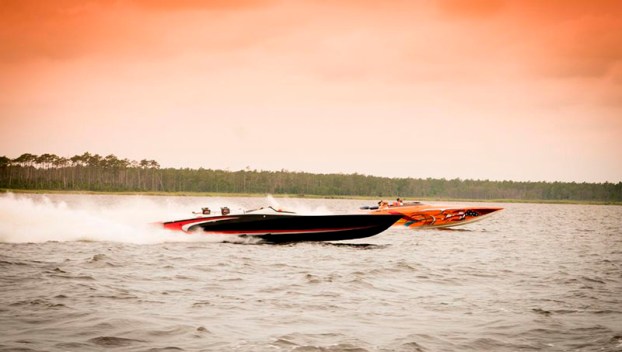 RIVER RUCKUS: Power boats galore will be out on the Pamlico River on Saturday for the annual “Hauling Ass on the Pamlico” fun run. The event is a fundraiser for children—this year’s proceeds will go to local charity Angels N Camo. (Brad Parham)

“When in doubt, throttle it out.” It’s the motto of an annual fun run that will spur dozens of power boats down the Pamlico at full speed, with each pilot aiming to win.

But they’re also aiming to raise $10,000, according to “Hauling Ass on the Pamlico” organizer Brad Parham.

“This year, we’re donating the money to Angels N Camo, out of Chocowinity. Our goal is to raise $10,000 this year in hopes to buy a side-by-side ATV to put a stand on for the kids when they take them hunting,” Parham said.

“Last year, we had a little over 200 people and 48 boats. This year is going to knock that in the head. It’s going to be controlled chaos out there,” Parham said, adding that boats and riders are coming from across North Carolina, and as far away as Virginia and Indiana, to participate in the poker run. The boats will depart the Iconic Marine Group facility (Fountain Boats) at 10:30 a.m., but before they take off downriver, they’ll do a drive-by of the Washington waterfront for the Washington Summer Festival crowds.

“We go downtown Washington and do a — we call it a ‘show-in-shine,’” Parham said. “That way everybody can see the boats, and know we’re not just raising a ruckus. We’re doing it for a good cause.”

Parham encouraged festivalgoers to wave and cheer them on, as well as post photos of the power boat parade on social media. He encouraged boat owners to join the race.

“All boats are welcome. It doesn’t have to be power boats. We’ve got pontoon boats (registered),” Parham said.

The course goes from Washington to Bath then Belhaven and includes a raft-up party at the Maules Point sandbar, along with dinner. Money raised is through T-shirt sales, raffles and a silent auction.

A historic downtown building is poised for reuse after renovations to it are completed. During its meeting Tuesday, the Washington... read more