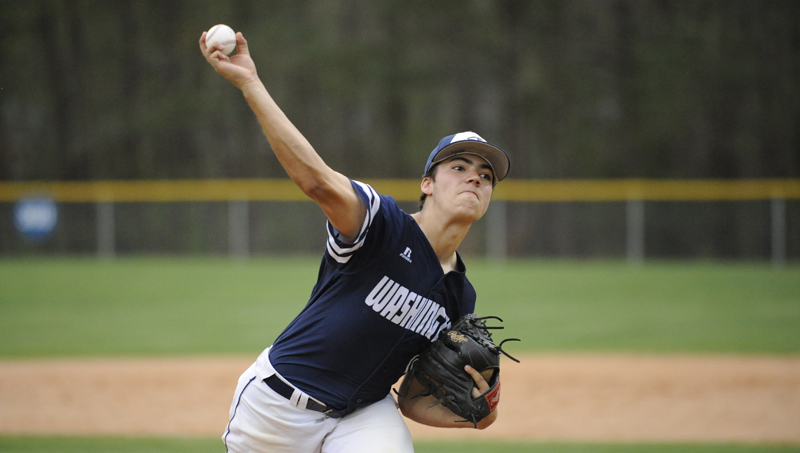 FROM ASHVILLE TO SANFORD: Former Pam Pack pitcher Tripp Barfield fires in a pitch last season. Barfield, who just wrapped up his freshman year at UNC Ashville, will spend his summer playing for the Sanford Mainers in the NECBL. (File photo)

The six-foot pitcher, who is a rising sophomore on the University of North Carolina-Asheville baseball team, said he was eager for the opportunity when his college baseball coach told him he was being placed to play in the NECBL.

“I was pretty excited because there’s good competition up here,” Barfield said. “You’re kind of bunkered up next to the Cape Cod League, which is where you want to be. It’s just a good opportunity for me to get away from home and to play against good competition.”

Barfield will pitch for the Sanford Mainers in Sanford, Maine. He will be playing with players from national powerhouses such as Texas Christian University, Vanderbilt, Georgia and Michigan, as well as players from Atlantic Coastal Conference schools Duke, Virginia Tech and Boston College.

Barfield views the opportunity to be around and play with players from such big baseball programs as a great learning experience.

“There are a lot of big schools (represented on the team) and there’s a lot of talent on the team. It can only help me get better as a pitcher,” Barfield said. “What I learn this summer I can take with me back to Asheville in the fall and next year and beyond there. It’s crucial; it’s going to be a summer of opportunity and also a summer of a lot of learning.”

As a freshman at UNC Ashville, Barfield was 0-1 in 17 appearances as a middle reliever. He pitched a total of 20 innings, striking out 18 batters in his time on the mound.

While Barfield’s first year as a Bulldog didn’t go as well as he would’ve liked, the Chocowinity native isn’t getting too down about it. He’s focused on the present, having set goals for himself over the summer.

“I kind of got hit around a little bit in the spring (playing for UNC Ashville). But, you know, that’s going to happen,” Barfield said. “(My goals are to) work on my curve ball and hitting my spots better, just being a better pitcher ultimately.”

As a senior at Washington in the 2017 season, Barfield was 7-1 with a 1.14 ERA. In his 55 innings of work, Barfield struck out 58 batters and issued 16 walks. He was a two-time All-Conference performer in the Eastern Plains 2A Conference, as well as a Washington Daily News All-Area selection. Along with playing for the Pam Pack, the right-hander played summer ball with the Carolina Cubs Showcase team. With the Cubs, Barfield was an All-Tournament selection at the 2016 Atlanta World Wood Bat Association tournament.

The NECBL is seen as a breeding ground for potential future professional baseball players. The league gathers collegiate prospects from all over the country to play in conditions that best replicate what many will see in professional baseball, such as accelerated schedules and traveling, wooden bats and tough competition.

Barfield’s team for the summer, Sanford, has had recent success preparing players to play at the next level. 12 former Mainers were selected in the 2016 Major League Baseball draft, a franchise-record. And since 2003, more than 81 former Sanford players have been drafted or played professional ball, including seven that have made appearances in the Major Leagues.

The Mainers will play a packed44-game schedule through June and July and will play in towns all over the New England area, including the states of Connecticut, Massachusetts, New Hampshire and Vermont. Barfield and the Mainers begin their summer of baseball this week.