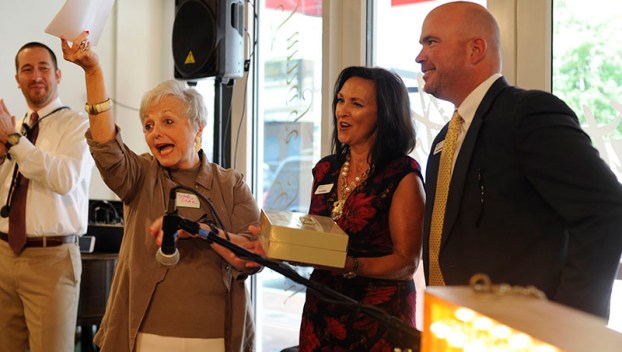 Arts of the Pamlico celebrated a milestone Thursday when the mortgage to the Turnage Theatre was paid in full.

The event drew a crowd of arts supporters, ranging from artists and musicians, former arts council board presidents, current and past board members and former AOP Executive Director Joey Toler, who traveled from Wilmington for the event.

“This is a monumental accomplishment for a small community with a big heart for the arts that has been steadily beating for more than 100 years,” AOP Executive Director Debra Torrence told the audience.

The push to pay off the mortgage began last fall, when the AOP board realized $118,000 was still owed on it, and a balloon payment was coming. With the help of longtime AOP supporters and a request for donors to join the 5K Club — membership a contribution of $5,000 — the fundraising took off. 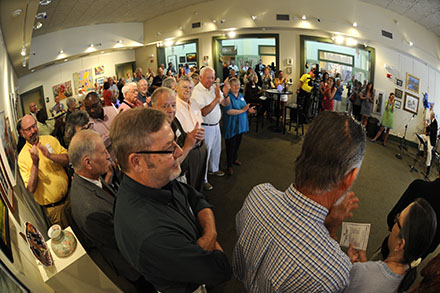 PAST AND PRESENT: Arts supporters, artists, past and current board members and former Arts of the Pamlico Executive Director Joey Toler (pictured in profile in the foreground) turned out for the reception Thursday afternoon. (Vail Stewart Rumley/Daily News)

The Turnage Theatre has a long and storied history. Built in the early 19th-century, it originally hosted vaudeville performances in its second-floor theater, including a visit from Roy Rogers and his horse, Trigger. With the growing popularity of film, a new palace-style theater was constructed in 1930, but by the time the 1980s rolled around, the theater was only hosting films sporadically. By the 1990s, the building was in danger of demolition; then, an effort was made to save the Turnage.

“The Turnage Theater Foundation led the theater restoration efforts of the first floor and palace theatre spaces in the early to mid 2000s and reopened in 2007 with the support of private and public donations, community members, and corporate support. Sadly, the theatre had a short life and went into foreclosure in 2011,” Torrence wrote in a press release.

It was the Beaufort County Arts Council that stepped in to take the Turnage reins after the building sat empty for several years. The arts nonprofit purchased the theater out of foreclosure and reopened in 2013 as Arts of the Pamlico.

For all those involved, the mortgage payoff on Thursday was a celebratory moment, according to John Tate, who was president of the Beaufort County Arts Council board when the Turnage purchase was made.

“It was a good day,” Tate said. “We’re very pleased that people stepped up to make these contributions. We’re standing on the shoulders of other contributors in the past that made the Turnage happened to begin with and, of course, all of the other people who supported the arts council for so many years.” 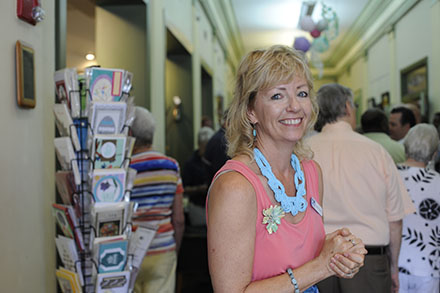 CELEBRATION: Executive Director Debra Torrence welcomed guests to a reception and toast on Thursday, a celebration of Arts of the Pamlico paying off in full the Turnage Theatre mortgage. (Vail Stewart Rumley/Daily News)

For 35 years, Washington has officially kicked off summer with the Washington Summer Festival. Friday is no different, as Beaufort... read more