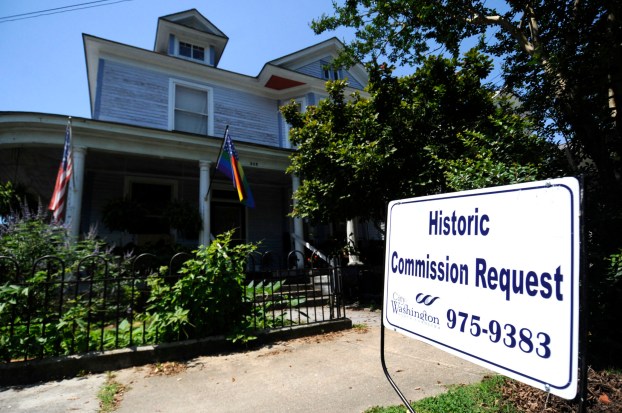 PERMISSION GRANTED: As historic district residents, Jane and Andy Olsen had to consult the Historic Preservation Commission in order to make some changes to their home’s exterior, including a window they plan to remove and several more they plan to replace in the kitchen addition on the back of the house. The changes will make the exterior more historically accurate, as the addition was tacked on to the circa-1880s home over the years. (Vail Stewart Rumley/Daily News)

Historic home, with not-so-historic kitchen, to get overhaul

Most people have something they’d want to change about their home — the color of a room, outdated bathroom tile, a larger closet. For one Washington family, it’s the kitchen, and the change that’s to come falls in the category of “dream kitchen come true.”

The East Second Street home of Jane and Andy Olsen was built sometime in the 1880s — the date’s not set in stone. As with most historic homes, this one has changed over the years, most notably in the expansive kitchen/dining area tacked on to the back of the house at some point in its life.

“Our best guest is the ’70s, but we really don’t know. And it’s been redone a couple of times because it was apartments and a boarding house,” Jane Olsen said.

The project is set to “go” on Saturday, as the Olsens and friends celebrate the remodel with some sledgehammers, taking everything the kitchen is now down to the studs. Everything’s got to go, according to Olsen. 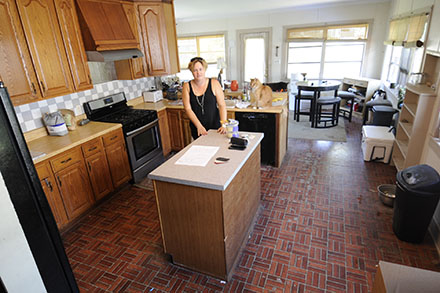 “The process of getting to it, though, has been an insane amount of stuff to do. It’s an old house. Nothing’s just, ‘Do one thing;’ it’s 50 things,” Olsen said. “We can’t just replace the floor — we’re going to have to rip it all out and replace the subfloor.”

It’s the plight of historic home owners: the surprises that come with renovation. Here, the kitchen/dining area is actually two additions made over time, one the original, small kitchen, and another built over a raised brick and concrete patio that still exists. Behind one wall in the kitchen is a brick chimney originally located on the exterior of the house — the Olsens first ran into it when they built a bathroom upstairs. Rather than view an immoveable chimney as an obstacle, they’ve decided to incorporate it into the kitchen’s design.

With the help of Stacey Fuldner and Chris Smith, of Main Street Kitchen and Bath, the gut renovation will take the room from a hodgepodge collection of surfaces and cabinets and transform it into a cook’s kitchen. That’s important to Olsen, as she’s cooked professionally for many years.

“I cook all the time. Cooking is such a part of my daily life, to have (a kitchen) that functions is really going to make things better,” Olsen said. “Everything takes more time (now) because there’s not enough room in the fridge, or you have to walk all the way across this space. It’s not an efficient work triangle.” 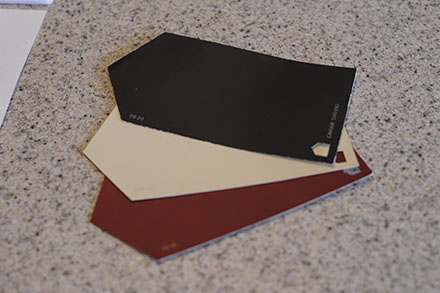 HISTORICALLY ACCURATE: A part of the kitchen renovation, the whole house will get a color makeover. The brick red is intended for the exterior; the black and cream as accents.

The kitchen redesign includes small, hexagonal black and white tile flooring, black and white granite countertops, a white subway-tile backsplash, sleek, black cabinets and drawers with plenty of built-ins and roll-outs, a double-basin farmhouse sink, an eight-burner gas stove and an immense 38-square-foot refrigerator. In the open dining/living area, the plan includes a built-in dining room table with seating, as well as seating along the bar separating the two areas.

“We designed it with the plan that, hopefully, I’ll be able to do cooking classes and cooking demonstrations eventually,” Olsen said.

Until its completion, Olsen plans to leave it in the hands of her trusted designer and contractor for a few weeks while she travels with her children. After that, a temporary kitchen of refrigerator, microwave and cook-plate will be set up in the dining room, to avoid eating out all the time.

For Olsen, the expense, and living without a kitchen for a while, is worth it.

Watch the Homes Section in Friday issues of the Washington Daily News as we check back in with the Olsen renovation. 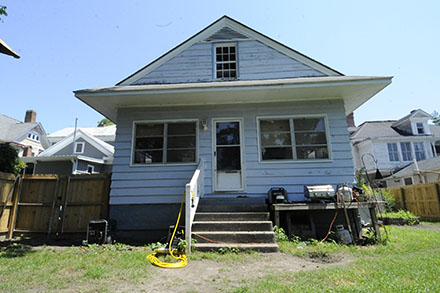 HOW BUILDINGS GROW: The kitchen/dining/living area actually consists of two separate additions made through the years. The windows and door will be replaced and the whole will receive another addition: a deck. (Vail Stewart Rumley/Daily News)

Arts of the Pamlico celebrated a milestone Thursday when the mortgage to the Turnage Theatre was paid in full. In... read more