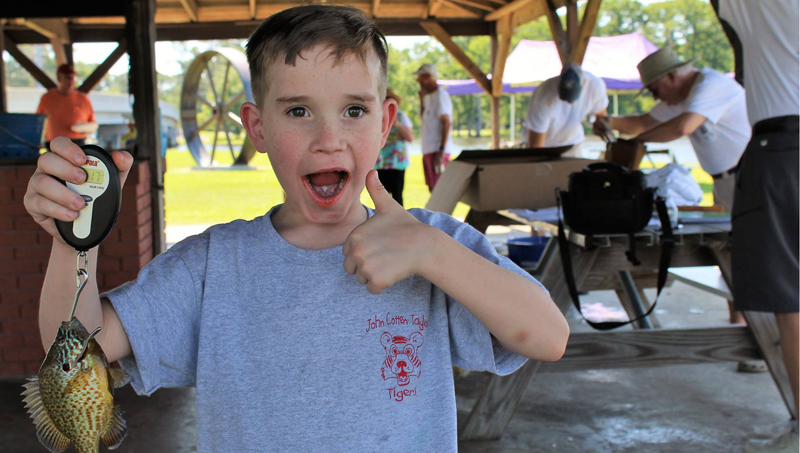 THUMBS UP: A young participant from last year’s edition of the Charlie Griffin Memorial Fishing Tournament proudly shows off a fish he caught. (Contributed)

The tournament was renamed the Charlie Griffin Memorial Fishing Tournament three years ago to commemorate Griffin, who died of cancer in 2015. The last time Griffin left his house before passing away was to attend the fishing tournament, according to Bill Wall, treasurer for the Washington Rotary Club. Wall spoke fondly of the last club event Griffin attended.

“One of our club members went up and picked (Griffin) up in his truck and brought him to the tournament,” Wall said. “He sat with us for about an hour and he sat there and he cried and we cried. And we were happy and we told stories.”

All proceeds are given by the club to fund a wide range of local activities and organization, including food pantries, disaster relief, humanitarian relief agencies and services to the needy. Some of the organizations that receive funds from the tournament are Eagle’s Wings, Beaufort County Community College and the Boys & Girls Club.

What helps drive the club in putting together the tournament and in doing all it does to help the community is the desire to help out those that face difficulties in life, according to Jay Sullivan, rotary club member and co-chairman of the tournament.

“It’s really about trying to raise money for those special projects that are so important for humanity,” Sullivan said.

Another organization the club works with closely for the event and gives funds to is Angels N Camo. The non-profit organization, which is partnering with the Evening Rotary Club for the third year, dedicates itself to helping children in eastern North Carolina with life-threatening illnesses to fulfill their hunting and fishing dreams. Angels N Camo has brought numerous kids to fish in the tournament in the past, with several more expected to attend tomorrow.

Registration for the event, which is a catch and release tournament, can be completed the day of the tournament on location with the payment of a $25 entry fee. All registered fishers will receive a T-shirt and will be eligible to submit a maximum amount of two fish into the competition. The angler who catches the largest North Carolina game fish by weight will take the adult division’s first place prize of $750. The winner of the kids’ division (under the age of 18) will win $150.

The fishing tournament will be held at Havens Gardens on River Road. It starts at 6 a.m., and the last weigh-in is at noon. The public is also invited to watch the competition.