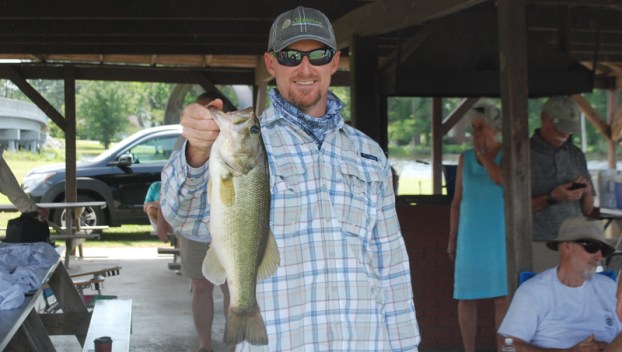 FIRST-PLACE CATCH: Justin Snyder poses at the weigh-in with the fish that earned him first place. This was the second time Snyder participated in the tournament and he says he’ll be at every one the club puts on. (Sean Finnerty | Daily News)

It was yet another successful fundraiser in the books for the Washington (evening) Rotary Club this weekend, as the organization dedicated to providing humanitarian services held its 10th annual Charlie Griffin Memorial Fishing Tournament.

Evening Rotary Club members, fishermen and guests assembled at Havens Garden Park on Saturday for the club’s signature fundraising event of the year. More than 30 fishermen took part in the tournament, helping raise nearly $16,000 this year, according to Jay Sullivan, a club member and co-chairman for the tournament. He added that the club members “feel really good about this project this year.”

“I think it was a great time. There was fun had by all,” Sullivan said. “The kids enjoyed themselves. We had a lot of good fish come in. Some that broke three pounds, which is pretty good. I think everybody had a great time.”

The proceeds from the fundraiser will go to a wide range of local activities and organizations, such as Eagle’s Wings, Angels N Camo, the Boys & Girls Club and scholarships to Beaufort County Community College.

The anglers set out to try and catch a prize-winning fish at 6 a.m. and returned to Havens Garden by noon for the final weigh-in. Club members and guests hung out at the park, socializing and enjoying refreshments, awaiting the return of the fishermen.

Starting around 11:30 a.m., fishermen from around the county began to trickle in to see if their catch was big enough to take first place.

Justin Snyder took home the first place prize of $750, thanks to the 3.56-pound bass he brought in. Snyder, who was participating in the tournament for the second time, said “it’s excellent” to be able to help people out by raising money and have fun fishing at the same time.

A returning fisherman from prior tournaments was Jackie Smith III, who finished in third place in the kids’ division last year. Smith has participated in the last three tournaments as a guest with Angels N Camo, an organization that grants fishing and hunting trips to children in eastern North Carolina with life-threatening illnesses.

“The funds (the club) generates from the fishing tournament, they donate back to the community. We happen to be one of the non-profits that receive donations from the (evening) Rotary Club. We’re thankful for that. We’ve got some events coming up so all the funds we get in are very helpful,” Bryan Adams, co-founder of Angels N Camo, said. “A lot of the families (we help) want to get away for the day, forget the concerns and just get away from life dealing with an illness and enjoy the outdoors. It’s a big relief and a big break for the family.”

The event concluded with tournament’s organizers thanking the sponsor and donors for their contributions and said they look forward to next year’s tournament.

“We’ll be doing it sometime the beginning of June, the first Saturday in June, hopefully,” Sullivan said. “We’re already looking at that date and setting that and we’ll be doing some advertising in a few months about it.”

The aquatic center offers plenty over the summer

It’s about that time of the year when the mercury in thermometers rises ever so high and the air becomes... read more