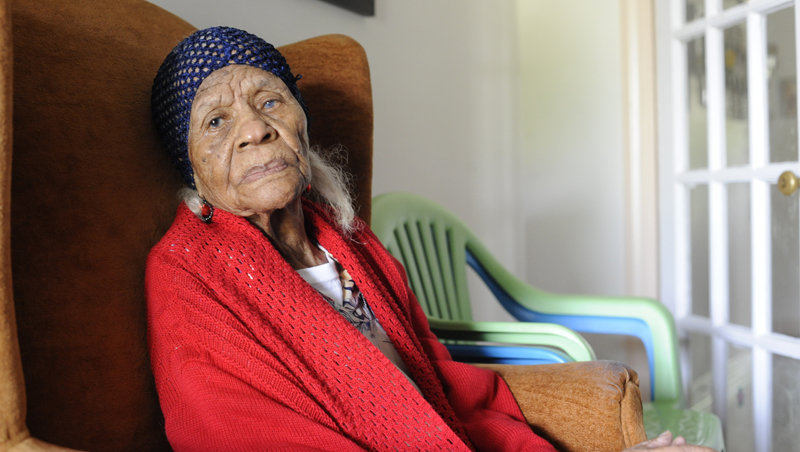 Willie Neal White Oden has been a member of St. Luke Church of Christ for 91 years. Saturday, the mother of seven, grandmother, great-grandmother and great-great-grandmother celebrated her 103rd birthday, surrounded by family and friends at the home she and her husband built and moved into “on the first day of December 1950,” she said.

Then, she used a pump to draw water: “Back then, we didn’t have no rug, and we had to get down on our knees and scrub. And we had an icebox.”

Life was very different when Willie Neal White was born in Greenville on June 8, 1915. When she was 7 years old, she moved to Washington to live with an aunt and uncle after her mother died. She was a good girl: she went to church and Sunday school every Sunday, was told to stay out of juke joints — which she did — and she lived by her grandmother’s words: “It’s not what you do, it’s the company you keep.”

“First thing Sunday morning, she’d give us our do’s and don’ts,” Oden recalled.

Lessons from her grandmother have stuck with her over the past century, vivid memories to this day. Oden recounted one night, the two were walking across the yard to the kitchen, in a building separate from the house, as was common.

“I said, Grandma, let’s not wash the dishes tonight.’ She said, ‘Willie,’ — because she called me Willie — ‘Always leave your kitchen clean. Don’t ever go in a dirty kitchen,’” Oden said. “From that night until this day, I’ve never left a dirty kitchen. I was a child.”

Oden remembers watching movies at the Turnage in the 1930s, back when ice cream cost 5 cents a cone, she said. When her grandson, Julius, who she and her husband raised, asked her Saturday how much gas cost in those days; her response was an amused, “Well, back then we did more walking.”

She got her education at the River Road School; today, the building, a church, still sits at the corner of Asbury Church and River roads. She met the love of her life at this school — she and Johnnie Oden grew up together, got married. He went off to fight in World War II and came back. Their family grew with the births of William, Charles, Johnnie Jr., George, Ella, Annie and Susie.

Much has changed over the past century of her life: some things Oden likes; some she doesn’t care for. Microwaves have her approval; dishwashers do not, she said.

She’s lost her husband and four of her children, but it’s faith and family that are the driving forces in her life, according to grandson Julius. On Willie Neal Oden’s 103rd birthday, she was surrounded by both.