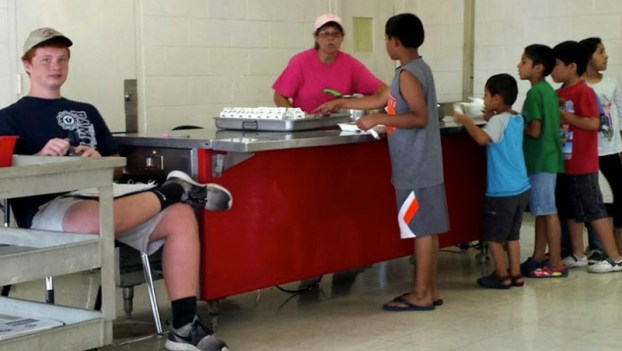 HELPING HANDS: Sam Singleton and Debra Howard help feed children at the Ed Tech Center in 2016. Care-O-World has been feeding needy children and teens for a decade now. (Teresa Clayton)

A program organized by locals and funded by the federal government will again provide free meals to students in Beaufort County this summer.

More sites will open June 18, offering lunch. They are:

Initially headed by Beaufort County Schools, Care-O-World became the program’s leading sponsor in 2008, though BCS remains a partner. All meals this year will be cooked in a single kitchen at P.S. Jones Middle School. Last year, 30,000 meals were given away, and Care-O-World hopes to surpass that number by another 5,000 meals this time around.

The federal Department of Agriculture covers the meals’ costs. No state or local funds are collected.

“The whole point is to replace the meals students would have at school,” said Jason Carrow, the executive director of Care-O-World.

In 2017, a federal provision guaranteed Beaufort County students free breakfasts and lunches at school. But come summer, many students go hungry, according to program officials. Around 22 percent of county residents under 18 live below the poverty line, according to a 2016 U.S. Census Bureau report.

“There’s one requirement,” for eligible children to eat, said Carrow. “Show up — there’s no questions asked.”

In years past, volunteers have gone to great lengths to make sure children are not only fed, but also have something to do while they’re at the feeding sites. Last summer, “literacy volunteers” set out books for children to read and take home after their meals. Others brought toys to Quail Ridge.

Limited transportation is arranged via a Care-O-World bus, which picks up children from trailer parks and neighborhoods.

Carrow said the group would like to open two more sites this summer in Chocowinity and at Havens Gardens, but more volunteers are needed first.

For more information or to volunteer, email Care-O-World’s Teresa Clayton at teresac@careoworld.org, or call or text 252-943-5616.

While every graduation is special for the participants who walk and the families who watch, for the graduates of the... read more