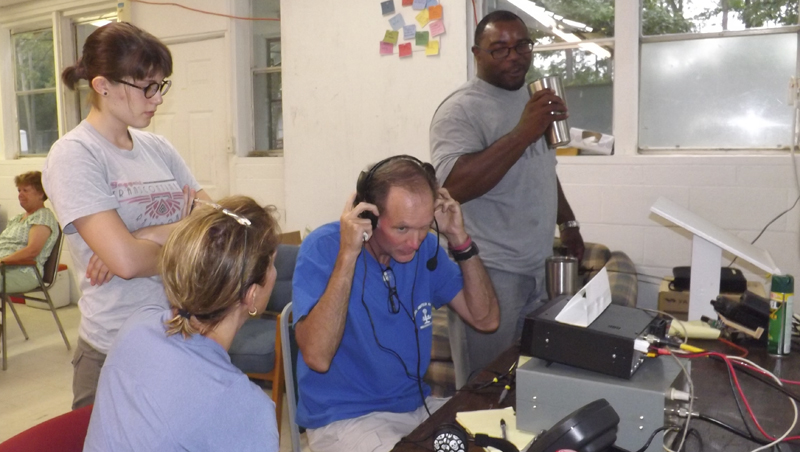 “It’s not much to look at,” said Cheryl McGuire, secretary of the Pamlico Amateur Radio Club. “But there’s a lot going on there.”

She was referring to the open-to-the-public Field Day that the club will participate in at Herbert C. Bonner Camp on June 23, starting 2 p.m. For 24 straight hours, she and other members will operate ham radios, make contacts and compete with like-minded people across North America.

Field Day is hosted by the American Radio Relay League and draws in more than 35,000 hobbyists every year, according to the ARRL. As much as it’s a contest, it’s also a chance for operators to test just how radio-savvy they are.

“This is the time of year when we really put in some practice,” said McGuire.

The goal is to connect with as many amateur bands—sets of frequencies—as possible. Old-school conventions like Morse code and modern ingenuities like solar power win clubs bonus points. This year PARC will operate a solar station.

“We get extra points where we can,” McGuire said.

Since its inception in 1991, “PARC members have provided essential emergency communication services to Beaufort and surrounding counties, through actual disaster communications support, disaster shelter support, as well as practice search and rescue support exercises organized by Beaufort County Emergency Services personnel,” according to the club’s website.

“Despite all the advancements of communications, that doesn’t eliminate the need four our ham radio operators,” said Emergency Management director Chris Newkirk, who will be stopping by Field Day to watch and support the operators.

According to Newkirk, all it takes is one tower going out of service during severe weather for ham operators to be needed.

“We don’t want to ever have to use them, but if we do need to we want to make sure they’re good to go,” he said.