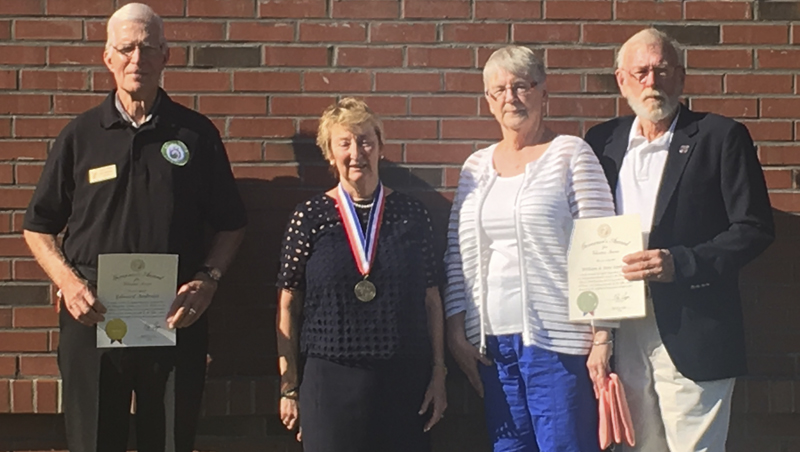 RECOGNIZED FOR SERVICE: Edward “Ed” Ambrose, Emily Albera and Jane and William Lenhardt pose in front of the Beaufort County Courthouse with their certificates and medallion. They were honored earlier this month by the governor’s office for volunteer work. (Christopher Ryan Oehrli/Daily News)

Edward “Ed” Ambrose of Chocowinity and husband-and-wife pair William and Jane Lenhardt of Bath were given pins and certificates at a meeting of the Beaufort County Board of Commissioners on June 4. Bath’s Emily Albera received a medallion in Raleigh from First Lady Kristin Cooper, an honor reserved for 20 to 25 North Carolinians every year. Albera was honored for her efforts in combating Alzheimer’s disease.

“I got involved because my mother had Alzheimer’s for 18 years,” she said.

Since 2005, she has organized walks and education fairs, at which experts and doctors provide information and screenings.

Last year’s walk attracted 250 participants, she said. Through an organization then known as Alzheimer’s N.C. and now as Dementia Alliance, she helped raise $41,000 that went to support services and research in eastern North Carolina, “a considerable achievement in a small Tier 1 county,” her nominators noted.

Ambrose has volunteered at the global food pantry Eagle’s Wings for close to 1,000 hours each year for the last three years, according to executive director Ann-Marie Montague, who nominated him. She mentioned in her nomination form that Ambrose often delivers food to home-bound clients, chatting with and befriending them.

The Lenhardts were honored for their maintenance of the garden behind the historic Van der Veer House in Bath. The house is one of the oldest sites in the oldest incorporated town in North Carolina. Its garden plays host to elementary-school field trips, history buffs and those fascinated by vegetables grown without modern luxuries.

The two undertook the project about five years ago, said William Lenhardt.

Caring for the garden requires some creativity. To keep in step with its historic locale, its produce sprouts from non-GMO heirloom seeds that are not sprayed with pesticides or insecticides. Instead, the Lenhardts used a “homemade concoction made from rosemary, garlic and pepper flakes,” among other things.

“The seeds take a lot of attention,” said Jane Lenhardt. “They need lots of tender care, lots of loving, lots of babying.”

Lisa Woolard, executive president of Beaufort-Hyde Partnership for Children, organized the application process for Beaufort County. Nominees could not fill out applications for themselves, and none of the four from Beaufort County knew they had been nominated — let alone that they had won — till Woolard called them.

“It was a wonderful surprise,” said Jane Lenhardt.

The application process for next year will begin “probably in December,” said Woolard. She’d like for Beaufort County to win all 10 nominations.

“It’s just so important that people understand there’s unsung heroes out there,” she said.