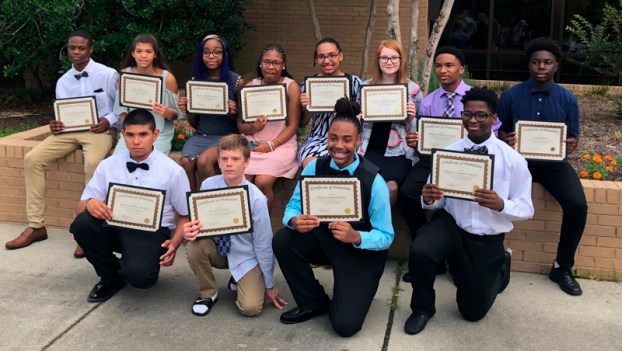 Filling in for PSJ, parents organize, lead Moving Up ceremony

In many ways it was familiar: there were guest speakers, baby pictures and the applause of proud, excited parents. But in two ways it was a unique Moving Up ceremony — it did not take place at P.S. Jones Middle School and it was not organized by the school.

The middle school’s improvement team voted in May and June 2017 to discontinue the years-long Moving Up ceremony “due to various reasons,” a statement said.

“Parents were notified at the beginning of the school year at open house about this decision,” it continued.

Parents at Thursday’s Moving Up said school officials told them the cancellation was for budgetary reasons, among others.

Parents were nonetheless unhappy with Moving Up’s disappearance, prompting them to make it happen on their own.

Tiffany Jones did not have a child graduating but still felt Moving Up was important, she said. She and others used social media to spread the word, secured BCCC as a venue and arranged speakers.

The school publicized Moving Up by sending out an email and distributing flyers after its award show, a statement from the vice principal said. It also provided the yearbook staff’s slideshow.

“Study hard these next four years, but plan what you want to do after, too,” said Langley.

Students and parents were grateful to organizers.

“It was a good thing to do so we’ll have something to look back on” said Rashad Gordon, who graduated.

“This is a really good thing they’re doing for the kids,” said Ebony Knight, whose son Ramel graduated. “It’s great when the community comes together.”

Jones said that as there’s interest she would be willing to help organize Moving Up in the future.

“It’s about our kids at the end of the day,” she said.

The search for a new director of the Washington Tourism Development Authority is in the first round of interviews. Lynn Davis,... read more