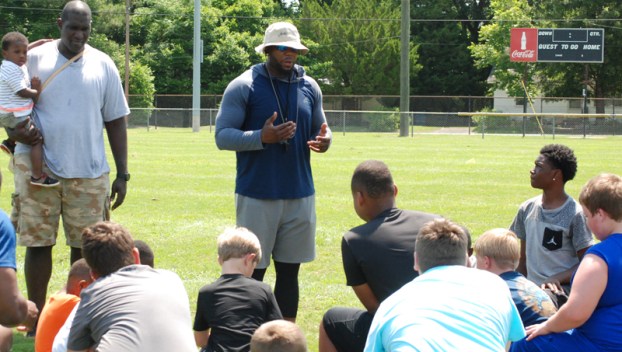 HOMETOWN HERO: Washington native and retired NFL player Terrance Copper speaks to his campers about how to succeed in life at the end of his free football camp this past Saturday. Copper, along with several other former NFL players from the area, put the campers through both agility and position-specific drills. (Sean Finnerty | Daily News)

WASHINGTON — Several former NFL players took to Washington’s Kugler Field this past Saturday to help give back to the community they came from. Terrance Copper, a Washington native who played nine years in the NFL, hosted a free football camp for kids, with the help of Washington Police-Fire Services and a couple other former professional and college football players.

Having a chance to work with and help out local kids is something Copper looks forward to.

“I enjoy doing it,” the former Pam Pack and East Carolina University wide receiver said. “I’m from Little Washington, I was born and raised here and I love to have the opportunity to come out here and have camps. I didn’t experience it too much growing up, so it’s something I always want to give back to the community.”

Along with Copper, former NFL players C.J. Watson, who’s from Belhaven, Barry Richardson, Willie Smith and former Pam Pack running back and current Fayetteville State player Stevie Green helped run the camp. They ran the campers through agility drills and broke off into position groups to do position-specific drills and exercises. They also took the time to go into more detailed concepts, like defensive alignments.

J.C. Lewis was one of the kids who attended Saturday’s camp. He said he enjoyed learning some new things about football, as well as learning a bit more about concepts he was familiar with, such as setting and reading holes in the offensive line.

“It was fun. I thank all the coaches for just helping us with everything that they helped with. It was a fun camp. I had some nice throws, some nice running back plays. I had to throw a one-inch throw over the middle linebacker, in case he might pick it off, but he never did pick it off,” Lewis said. “I learned about some more tosses, because you have the reverse toss. I learned some more about that. And then I did some deep throws, which was fun to me. It was cool.”

Giving back to the community is something Copper said he really enjoys doing. He can’t quite recall when exactly he started holding these free football camps; just that it was around 10 to 12 years ago.

“We’ve been doing it for a while,” Copper said. “It’s something we enjoy doing. And the guys in this area, the guys that aren’t from this area, they enjoy coming down and helping me do it.”

Despite being a football camp, it was about more than that. After they were all finished up running football drills, Copper and his fellow coaches gathered the kids around. At that point, they spoke to the campers about what it takes to succeed in life, including making good grades in school.

“It’s not just about football. You want to mold them to be good citizens and productive citizens in the community,” Copper said. “Like I say, you don’t have to be a football player when you grow up. I got guys here that played in the NFL, four, five guys that played in the NFL. It shows them, ‘listen, you can be from a small town, like Belhaven or Little Washington, different places like that, and you can fulfill your dreams. It doesn’t matter what your dreams are; you can fulfill them.’ But I tell them it’s going to take hard work; it’s going to take dedication and sacrifice. So no matter what they want to be in life, they can fulfill (their dreams).”